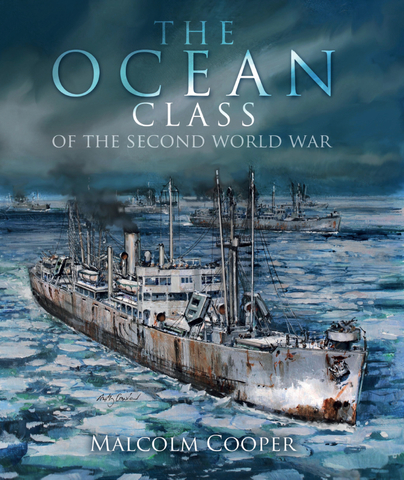 The Ocean Class of the Second World War (Hardback)

Add to Basket
Add to Wishlist
You'll be £30.00 closer to your next £10.00 credit when you purchase The Ocean Class of the Second World War. What's this?
+£4.50 UK Delivery or free UK delivery if order is over £40
(click here for international delivery rates)

This new book tells the story of the Ocean class of standard cargo ships, their design, building and careers, and the author places them firmly in the context of the battle of the Atlantic which was raging at the time of the first launchings.

They entered the vanguard of the Allied shipping effort at a time when the German U-boat threat was at its most dangerous, and British shipping resources were stretched to the limit. They were deployed in the North Atlantic, on the long supply routes around Africa to the Middle East, in the Russian convoys, in operations in support of the invasions of North Africa and Italy and the land campaigns which followed, in the D-Day landings and later amphibious operations on the south coast of France. Finally, some of the class joined an invasion force making its way towards Malaya when Japan surrendered in August 1945. The Oceans paid a heavy price for these accomplishments, one third of the class being lost to torpedoes, bombs or mines in places as far apart as the Florida coast, the Norwegian Sea, the Bay of Algiers and the Gulf of Oman.

While these achievements alone would merit an important place in histories of the war at sea, the impact of the Oceans stretched far beyond the direct contribution of the ships themselves. The yards where they were built also served as models for a series of new American shipyards, designed to mass produce cargo vessels with such speed and in such volume as to completely reverse the mathematics of attrition, which had run so badly against the Allies into 1942. Even more important, the Oceans’ blueprints were used as the basis for the American Liberty ship, the 2,700-strong fleet which finally tilted the balance of the war at sea decisively in the Allies’ favour and went on to underpin the post-war renewal of the world merchant fleet.

This comprehensive new history, based on extensive archival research and lavishly illustrated with contemporary photographs, restores the Oceans to their rightful place in history. The ships’ design antecedents are explained, and their ordering, financing and construction analysed in full. Wartime operations are covered in depth, by theatre and with full details of war losses and other casualties. The book concludes with an assessment of their subsequent peacetime careers and a comparison to other war-built designs. This is a model history of a highly significant class of ship.

Illustrated with a lot of archive photos throughout the book, including when in civilian service in the final sections. As well as their own story, it also influenced the famous Liberty Ship program in the USA, with their mass production techniques as well as various design elements and use of welded construction rather than rivets. A really interesting story I had not appreciated before, and packed with detail, especially on their service in both war and peace. Another excellent naval reference from Seaforth Publications, part of Pen & Sword.

MALCOLM COOPER is a maritime, naval, and military historian specialising in the era of the two world wars. After completing his doctoral research in military history at Oxford University, Malcolm Cooper held a research fellowship at Downing College, Cambridge where he completed a study of British air policy during the First World War, before transferring his attention to maritime history, spending a year teaching at the Memorial University of Newfoundland. He has published a series of fleet histories of nineteenth- and twentieth-century shipping companies, including Nautilus Steam Shipping, the Glen Line and J & C Harrison.