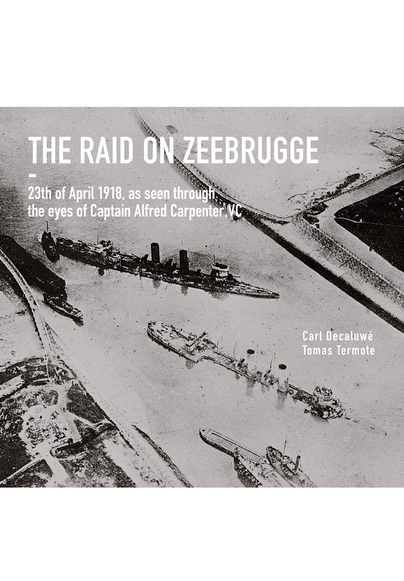 The Raid on Zeebrugge (Hardback)

23 April 1918, As Seen Through the Eyes of Captain Alfred Carpenter, VC

Add to Basket
Add to Wishlist
You'll be £25.00 closer to your next £10.00 credit when you purchase The Raid on Zeebrugge. What's this?
+£4.50 UK Delivery or free UK delivery if order is over £40
(click here for international delivery rates)

This book is the fruit of the chance discovery of a series of photographic plates belonging to Alfred Carpenter, who commanded the lead ship, HMS Vindictive, during the raid. These pictures provide us with a unique insight into this daring naval operation, which was to result in the most Victoria crosses ever being awarded for a single action. The plates were used by Captain Carpenter to illustrate a lecture tour of the United States and Canada after the war.

Winston Churchill called the raid on Zeebrugge 'the finest feat of arms of the Great War'. This brief, but bloody, action resulted in the highest number of Victoria Crosses ever awarded for a single action. Approximately one thousand officers and men of the Royal Navy and Royal Marines stormed the most heavily defended U-Boat base in Occupied Europe. German submarines based in Zeebrugge were responsible for a third of all allied shipping losses during the First World War.

During the Passchendaele offensive of 1917, the Allies attempted to capture these U-boat bases by means of a land-based attack. The failure of the Battle of Passchendaele made it clear that a naval assault was the only solution. As a result, on 23 April 1918, a small force of fighting vessels, towing three blockships, set out across the North Sea...

The Raid on Zeebrugge is compiled by two
Belgian authors and faithfully reproduces the glass slides from the post-war lecture tour of Canada and the United States by Captain Alfred Carpenter VC, the CO of HMS Vindictive, as full-page images. The slides bring the story
of the raid to life by combining photos of the main combatants and the harbour defences with maps, charts and artists’ illustrations. The short accompanying narrative, despite suffering slightly from minor translation errors, fully supports the rationale behind the raid, and
also acknowledges the sacrifice paid by many of the participants – there were more than 600 casualties – and by the civilian inhabitants who suffered from the shore bombardment.

The books work well together, providing contrasting accounts of events, and when read jointly give a comprehensive understanding of this ambitious and heroic venture.

This is a worthy book, a delight to view and a serious source in its own right. It is a fitting testament to those brave men who fought, not least Captain Carpenter VC.

This book is the result of the chance discovery of a series of photographic plates belonging to Captain Alfred Carpenter, who commanded HMS Vindictive (an Arrogant Class cruiser), the lead ship during the daring raid on the German naval installations at the port Zeebrugge on 23rd April 1918. These amazing plates provide a unique insight into this daring naval operation and were used by Captain Carpenter to illustrate the subsequent post war talks he gave on the operation.

German submarines based in Zeebrugge were responsible for a third of all allied shipping losses during the Great War. In April 1918, a small force of fighting vessels, towing three block ships, crossed the North Sea with 1,700 officers and men of the Royal Navy and Royal Marine Light Infantry and attacked the German base – the most heavily defended occupied Europe.  In the event, the block ships were sunk in the wrong place and after a few days the ship canal was again open to submarines at high tide. British casualties were 583 men and German losses were 24 men, but the raid was publicised around the world as a great victory and many medals were awarded – including six Victoria Crosses. Indeed, this brief, but bloody action resulted in the highest number of decorations awarded for a single action in the whole of British military history.

The inspiration for this book came from the chance discovery by one of the authors of two identical wooden boxes, each containing a collection of old photographic plates... The authors have certainly achieved their objective of creating a fitting tribute from the photographic plates. They have also produced a useful and significant addition to the literature on the Zeebrugge raid.

Carpenter was one of the leaders of the raid [on Zeebrugge] and this book is based upon a box of glass plates that belonged to him and which he evidently used to give talks about the raid in the interwar years.

The plates lay forgotten for many years until they were bought through an antiques dealer by the authors. They have cleverly put the pictures together with a short text and some modern pictures for comparison and, in doing so, made an excellent book to commemorate the event. Carl Decaluwe is the governor of West Flanders and Tomas Termote is a historian based in Belgium, where preparations are being made to celebrate the centenary of the Zeebrugge raid. This excellent book is a very good curtain raiser.