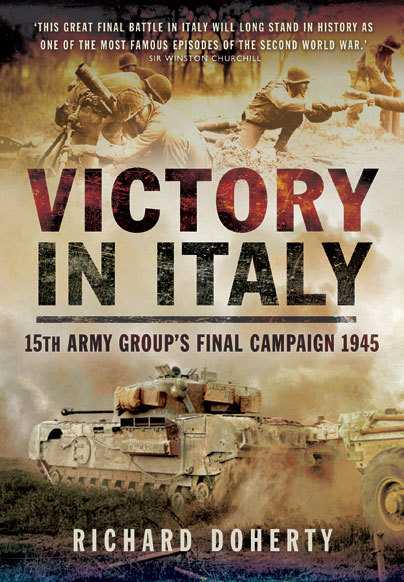 You'll be £25.00 closer to your next £10.00 credit when you purchase Victory in Italy. What's this?
+£4.50 UK Delivery or free UK delivery if order is over £35
(click here for international delivery rates)

While the main focus in early 1945 was on the advance to The Fatherland, 15 Army Group's 5th (US) and 8th (British) Armies were achieving remarkable results in Northern Italy.

In April the Allied offensive surprised the Germans with its speed and brilliance. As a result the Germans capitulated on 2 May before the surrender in Germany.

Churchill wrote to Field Marshal Alexander on 29 April 19.45 – 'I rejoice in the magnificently planned and executed operations of 15th Group of Armies'. Praise indeed.

This is a masterly description and analysis of this victorious campaign.


The relatively unknown success in Italy of Lieutenant General Mark Wayne Clark’s 15th Army Group, comprising American Lieutenant General Lucian Truscott’s American Fifth Army and Lieutenant General Sir Richard McCreery’s British Eighth Army, came in spite of the diversion of major formations to north west Europe, difficult theatre terrain, a harsh climate and general war weariness. The author reveals that the Allied campaign in Italy, overseen by Field Marshal Alexander, succeeded due to planning, preparation and training. Shortages meant that equipment had to be improvised, while air/ground operations were co-ordinated to a high level. The leadership and generalship displayed were of the highest order, even though the multi-national Allied forces included Brazilian, Indian, Italian, New Zealand, Polish and South African troops as well as American and British. In April 1945 the Allied offensive surprised the Germans of Army Group C (General Heinrich von Vietinghoff-Scheel) with its speed and as a direct result the Germans capitulated on 2nd May, before the surrender in Germany.

The author is Ireland’s leading military history author with 26 published works to his credit and this certainly shows through in the well written text. The book includes 42 monochrome illustrations, eight maps and two pages of drawings, outline orders of battle, a glossary of terms, a bibliography and an index. This title provides an interesting insight into a late war campaign, which to date, seems to have received only limited attention.

The war in Italy has been much under-rated. Churchill sold it as attacking the soft underbelly of the Axis, but there is more than a little evidence that he used the words as a sales pitch rather than as a genuine belief. On so many levels, the Italian campaign was entirely logical and necessary even though the Americans saw it differently. The author has written an absorbing account of the final campaign and provided insight and solid research. The illustrations are supportive with a good photo-plate section and appropriate maps. This is an important book about an important campaign. Recommended.

A comprehensively researched and well-written book.

Arguably the most authentic and authoritative history of the final battles in Italy.

Richard's tome sheds new light on this campaign, which he believes has heretofore been largely neglected in the historiography of the Second World War. Whilst 'Victory in Italy' takes a macro look at the united nations of Irish, Indian, Polish, South African, Jewish, Kiwi, Brazilian, Italian, Australian and US troops...it's undoubtedly the riveting story of Patrick Doherty's heroics that will be of greatest local interest...as well as bringing to print the spell-binding story of 'Rex' Doherty and casting light on a hitherto under-examined episode of the Second World War, 'Victory in Italy', like all good histories, also puts to bed a few old myths that aren't really borne out by the evidence.

The first ever detailed study of one of the most famous episodes of the Second World War - the great final battle in Italy.

Here's another very interesting book published by Pen & Sword about an important part of the wrapping up of the Second World War. This particular book - Victory in Italy - deals with the last part of the campaign in Italy, a campaign that was started already back to July 10th, 1943 with the landings on Sicily.

After a long campaign and hard fighting the Allied forces under General Mark Clark found themselves stopped south of a west-east front-line stretching roughly from Massa on Italy's west coast to just north of Ravenna on the east coast, and south of Bologna. Winter came and it was decided to regroup and reinforce, before making the final push into the Po river plains and towards the Alps - Germany's southern border.

Doherty's book is a very meticulous reconstruction of all the units involved and the battles fought, detailing to a very high level where all units were and what they did. At some point, even too meticulous, because I must admit I sometimes lost 'concentration'. Not having been a life time researcher of this particular area, many of the places and units were 'strange' to me and I sometimes had trouble memorizing units and places.

As always, my favorite way of reading such strategy books is to have some maps handy and refer back to them regularly. Indeed Doherty's book provides quite a few nice maps (all together at the front of the book) and they provide a good general overview of the main campaign and some of the most important battles. But personally I could have done with MORE maps and some in greater detail.

That was my criticism on the book. Overall it is a great work of research and well written.

What I found interesting personally, apart from the obvious learning about the campaign and players, were two things especially. One was the story about Hannibal and his army (yes, the one with the elephants) charging south and fighting the Romans in a major battle just south of Lake Trasimeno. That same spot was used as a training area to prepare for the amphibious operations in April of next year when the main push north started. Although we now live not far from that area, this was new to me and interesting to know. We'll drive through with a different view of the landscape next time !

The other thing that struck me is the account of the Kangaroo Army. Today we are all familiar with APC's and armoured infantry being carried into battle, but during WW2 this was still 'new'. Where the Russians had infantry sitting on top of (and clinging to) their tanks, both the Germans and Allied had the foot soldiers 'on foot', and at best in trucks. With the introduction of the Kangaroo - basically Sherman and Priest carriages with the weapons taken off! - there suddenly was a whole new way of - rapidly - moving infantry into the battles !

Also interesting to read and maybe not much realized is the extensive part about the specialized (engineers) equipment and operations, called for by the special terrain. The Po valley looks very flat on our regular boring trips from the Alps going south, but in reality it is an area with many rivers and many protective dikes. The Germans and Italians had made extensive use of these dikes to build fortifications INTO them, often in multiple layers. In addition the dikes were high ans steep and the allied armour could not easily drive over them. So we all know about Hobart's Funnies used extensively in the Normandy operation, but there were MANY special vehicles and solutions used in the Italian campaign as well!

The book was an interesting read and if nothing else, has triggered my interest in the Italian campaign and equipment, so I will be looking for more books with further detail on Italy !