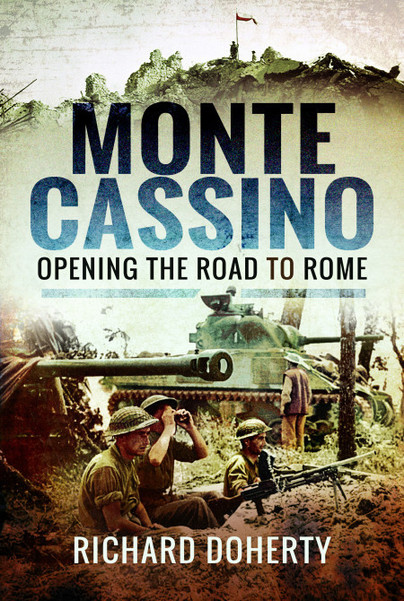 Opening the Road to Rome

Add to Basket
Add to Wishlist
You'll be £25.00 closer to your next £10.00 credit when you purchase Monte Cassino. What's this?
+£4.50 UK Delivery or free UK delivery if order is over £35
(click here for international delivery rates)

One of the bloodiest European battles of the Second World War was that from January to June 1944 for the Gustav Line, anchored on Monte Cassino, famous for its Benedictine Abbey. Better known as the Battle of Cassino, the campaign only ended when Rome was liberated. With General Sir Harold Alexander in overall command, the Allied Army Group in Italy, consisted of Fifth (US) and Eighth (British) Armies. Both were truly multi-national with some 20 allies nations involved. The book recognises the contributions of all elements and flags up the inevitable national tensions and rivalries exacerbated by restrictions of terrain and weather. Allied commanders, using ingenuity, highly effective artillery and sophisticated close air support, finally triumphed over their formidable German adversaries. Cassino: January-June 1944 examines the campaign from the political/strategic levels to the tactical, using official records, accounts from commanders and participants, including interviews. The Author has conducted many battlefield studies and written extensively on the War in Italy.

Author article: 'Next stop Rome: The Northern Ireland forces in the vanguard for Eternal City battle' as featured by

Doherty has done a good job here in putting together a narrative to cover a complex and challenging series of battles.

It is a very good book on the Monte Cassino battles and the campaign in Central Italy in early and mid-1944, and as such, I am delighted to add it to my library.

A very accessible and first-rate work, supported by good photographs and informative maps.

Few battlefields of WW2 evoke such powerful images of destruction and death as the monastery on the dominant heights of Monte Cassino and few authors can be as well equipped to tell the story of battle with such clarity and authority. Richard Doherty has spent many years studying the Italian campaign, has explored every inch of the rugged Cassino battlefield and brings his sharp eye for detail to his analysis of this complex battle at the strategic, operational and tactical levels. Monte Cassino – Opening the Road to Rome is highly recommended and the only book of the battle that the majority of readers would need.

It is a well-researched account of the struggle to breech the Gustav Line and is full of thought provoking observations about the strategy, the battlefield tactics and the experience of the service personnel involved along with the competency of their commanders.

Richard Doherty is Ireland’s leading military history author and it shows with this deeply researched book. It is impossible to do justice to his knowledge and perception in a single review, but suffice to say, from a military perspective, I very much doubt a better book will ever be written about the Battle of Casino.