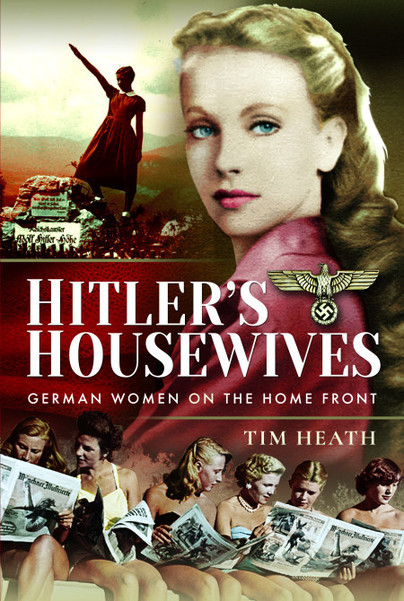 German Women on the Home Front

Add to Basket
You'll be £15.99 closer to your next £10.00 credit when you purchase Hitler's Housewives. What's this?
+£4 UK Delivery or free UK delivery if order is over £30
(click here for international delivery rates)

The meteoric rise of Adolf Hitler and the Nazi Party cowed the masses into a sense of false utopia. During Hitler’s 1932 election campaign over half those who voted for Hitler were women. Germany’s women had witnessed the anarchy of the post-First World War years, and the chaos brought about by the rival political gangs brawling on their streets. When Hitler came to power there was at last a ray of hope that this man of the people would restore not only political stability to Germany but prosperity to its people.

As reforms were set in place, Hitler encouraged women to step aside from their jobs and allow men to take their place. As the guardian of the home, the women of Hitler’s Germany were pinned as the very foundation for a future thousand-year Reich. Not every female in Nazi Germany readily embraced the principle of living in a society where two distinct worlds existed, however with the outbreak of the Second World War, Germany’s women would soon find themselves on the frontline.

Ultimately Hitler’s housewives experienced mixed fortunes throughout the years of the Second World War. Those whose loved ones went off to war never to return; those who lost children not only to the influences of the Hitler Youth but the Allied bombing; those who sought comfort in the arms of other young men and those who would serve above and beyond of exemplary on the German home front. Their stories form intimate and intricately woven tales of life, love, joy, fear and death. Hitler’s Housewives: German Women on the Home Front is not only an essential document towards better understanding one of the twentieth century’s greatest tragedies where the women became an inextricable link, but also the role played by Germany’s women on the home front which ultimately became blurred within the horrors of total war.

This is their story, in their own words, told for the first time.

Women the world over, but particularly in the UK, in France, Belgium etc., played similar roles to the German housewives and mothers featured in this remarkable book, although the fact that more than fifty percent of the electorate that carried Hitler to power in 1932 were female is for me the most telling part of this story.

Focusing on the women of Germany, I found this collection of tales from women of all ages fascinating. I think history buffs and those interested in World War II will enjoy the stories in this book.

I really enjoyed this collection of accounts from women and girls who lived in Nazi Germany. The accounts ranged from BDM girls, single girls and wives/widows. The accounts were very honest and no attempt was made to excuse early acceptance of the Nazi regime. These woman lived very ordinary lives in extraordinary times. Most recount the level of male dominance they encountered including rape and in some cases the constant threat of it from first their own nationality and later the invading armies.

This book was an interesting read. It is rare to read history from the perspective of women especially German women during World War II. In this book, journals, interviews and diaries, we the reader, are emerged in the psychs more than the life of these women. I don't think that it was a very well rounded study and defiantly only focused on a particular group of "German Housewives" but it does capture an interesting perspective of the women who lived in Hitlers country.

I would say that this is a great book to add to your study of WWII and women's history.

First of all, let me say, this is not an easy read - it is powerful and emotional but so so brilliant.

Part of WW2 history I was not aware of, I learnt so much. It gives another view of WW2.

Quite a harrowing and informative read.

Hitler’s Housewives talks about what women went through during Hilter’s reign. The sacrifices they had to make, the fear they lived in.

I learnt quite a lot with this read... Perfect for history/WW2/Fiction book lovers.

The Author presents us with an interesting book that deals with the idea of 'Hitler's women', their ordinary lives, expectations and failures.
Women constituted a high percentage of the voters that Hitler won through the promises of order and stability. Those young enough to remember the hardships during the Weimer Republic felt grateful to the Nazis for the 'new order'.
This book is based on interviews with several German women whose memories are the canvas for the portrayal of the lives ordinary Germans led before and during WW2. The memories are honestly presented, with some dose of sentimental note, which is understandable. The initial enthusiasm gives way to disappointment as the war progresses and self-denials.

It was unbelievable and fascinating to read, all at the same time. I could feel for these women and girls as they lost fathers, husbands, homes.....even while they seemed to close their eyes to the horrors around them.
I highly recommend this book.

My immediate thoughts upon finishing the book were that the book was both interesting and enlightening. This book reveals what life was like for the everyday, working class women in Germany under the rule of Hitler during the second world war.

I know I seem to find my self saying this about a lot of the non-fiction historical books I read, but I will say it again, these are the type of book that should be used in school history lessons. Perhaps then we will become a better society, that remembers errors of the past that should never be repeated. I found it interesting to learn how World War 2 and Hitler affected both those Germans that supported them, those that really did not, and those that had to be seen to support them even if deep down they had doubts or different opinions.

Hitlers Housewives is more than an eye opener of a read. It is the events of what really happened told by women. The book was engaging and gave me thought to how these women really did handle the war. So much more was expected of women, and even more so by themselves.

An interesting read to coincide with the 75th anniversary of the Halocaust and worth the read if you are into the history.
I personally loved the read and would definitely recommend this.

There are innumerable nonfiction books chronicling World War II in every aspect imaginable and it is a sub-genree of nonfiction I’m always interested in. I found this book to be different from many that I've read in the genre. Heath chronicles the rise of the Nazi party to the end of the war in Germany through the eyes of women. While there is no argument the heinous actions of the Nazis were deplorable, it is important to remember the state of Germany prior to Hilter’s rise to power.

“Germany’s females were without doubt an essential factor in the success of Hitler and the Nazi Party. Women formed a substantial part of the electorate and were partly responsible for securing his powerbase . The violence, racism and destruction, which culminated in the murder of democracy in full view of the outside world, would become the burden that many women would have to bear through the years after 1945.”

While not shying away from the gruesome realities, this book served to give a account of life in Germany throughout the war for private citizens who had no choice but the live in fear of the Third Reich. The women included in the book ranged from children to older adults, all with different experiences. The author did a fabulous job of providing a real look at life during the time period. Women were expected to be perfect housewives and mothers to as many children as possible, and later to pick up the slack when the men were forced into the military.

“Though 1939 had been a year in which many Germans had asked ‘War, what war?’ 1940 would be a very different year by its end, leaving few with any illusions as to what was coming.”

This book was wonderfully researched and told primarily in the form of journal entries and excepts from interviews between the author and survivors of the war. I would recommend this book to anyone who is hesitant to explore nonfiction because it reads like historical fiction due to its formatting.

This book is really interesting. It's about a topic that's often forgotten in ww2 history. It's about the women in Germany. Their lives and what it was like for them in nazi Germany. I would recommend it for everyone who is interested in womens history.

This book was honest, raw and human... Overall, this is a great addition to the historical record. It says a lot that the author let the words, the women, speak for them self rather than add page after page of analysis.

This was a different look at WWII. Not many books I have read have dealt with the war from the Axis civilian point of view. The story is a combination of author narrative, interviews, and letters. Not only are the memories of the “housewives” presented, but often memories from their children are included. If you are interested in the human impact of WWII, you will find this book of interest. I like the selected cover art.

This title had me hooked. Hitler's Housewives!

Great story, read this quick on my kindle paperwhite.

Very well written and put together, this book is a captivating read. I had not given much thought to the ordinary citizens (read: women), of Germany during the war. It was so overshadowed by the atrocities committed by the Nazis. This is an eye opening book and I encourage all WWII aficionados to read it. It is filled with the reality of how war touches the homefront and the courage of these women to go on in the face of adversity, pain and deprivation.

This book was such a good read, I couldn't put it down! The story and the characters were so well written it felt as if you were actually in the story!

Dramatic account of life, death and love under the Third Reich.

Born in to a military family, Tim Heath’s interest in history led him to research the air war of the Second World War, focussing on the German Luftwaffe and writing extensively for The Armourer Magazine. During the course of his research he has worked closely with the German War Graves Commission at Kassel, Germany, and met with German families and veterans alike. Born out of this work, Hitler's Girls is his first book. He lives in Evesham, Worcestershire, with his partner Paula.