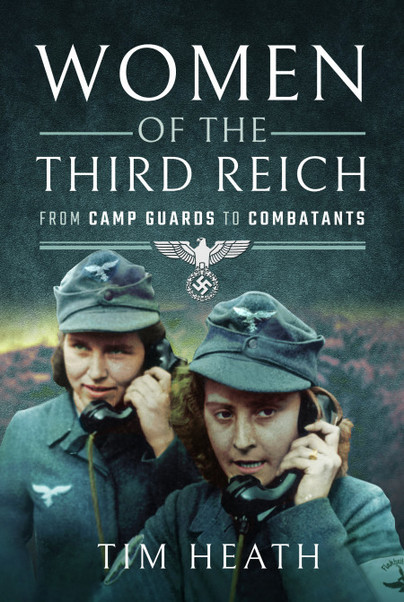 Women of the Third Reich (Paperback)

From Camp Guards to Combatants

Add to Basket
Add to Wishlist
You'll be £14.99 closer to your next £10.00 credit when you purchase Women of the Third Reich. What's this?
+£4.50 UK Delivery or free UK delivery if order is over £35
(click here for international delivery rates)

The women of the Third Reich were a vital part in a complex and vilified system. What was their role within its administration, the concentration camps, and the Luftwaffe and militia units and how did it evolve in the way it did?

We hear from women who issued typewritten dictates from above through to those who operated telephones, radar systems, fought fires as the cities burned around them, drove concentration camp inmates to their deaths like cattle, fired Anti-Aircraft guns at Allied aircraft and entered the militias when faced with the impending destruction of what should have been a one thousand-year Reich.

Every testimony is unique, each person a victim of circumstance entwined within the thorns of an ideological obligation. In an interview with Traudl Junge, Hitler’s private secretary, she remembers: ‘There was so much hatred within it’s hard to understand how the state functioned…I am convinced all this infighting and competition from the males in Hitler’s circle was highly detrimental to its downfall’.

Women of the Third Reich provides an intriguing, humorous, brutal, shocking and unrelenting narrative journey into the half lights of the hell of human consciousness – sometimes at its worst.

This book gives a intriguing, but also shocking insight into the thoughts of those young German women and how they saw their part in Hitler’s thousand year Reich. I found it very interesting that the girls saw Hitler in the same way as the young ladies in the sixties saw the Beatles. But you can see how easy it is to be caught up in the hysteria of the moment, and to what depths people will sink to, to please their leaders. Tim Heath has written a very informative piece, made all the more real because of the testimonies of those who were caught up in one of the most brutal of periods in the 20th Century.

The Third Reich had about 70 million inhabitants just before World War II, with the focus on the male population in history. In this book, however, Tim Heath investigated the experiences of women in Nazi Germany before and during World War II. For this he used interviews, diaries, letters and other sources. Several women are discussed, who have different experiences. Among other things, they tell about what happened to them during World War II. There are experiences of women employed by the German army. They sometimes also talk about what happened to their men or parents. What is special is that women speak candidly about their experiences, which were sometimes violent.

Reading's Tim's book on Hitler's female "warriors" I get the distinct impression that some of them, at least, were prepared to go the extra mile for their fuhrer, and sometimes in ways you simply would not expect of women. A regiment of Eva Brauns, it seems. A fascinating book, chilling at times.

This isn't just a glorifcation of what once was nor a voyeuristic view of cruelty perpetuated at the hands of a few; it is the stories of women - mere girls at the time - and of how they lived and survived in a time many of us today were lucky not to have. And maybe, just maybe, when you come to the end, you shed a little tear for the loss of so much innocence.

This carefully researched work provides a comprehensive view of German women in the Third Reich. The Germans mobilized their women along Nazi lines which sought to make everything from childbirth and domestic activity through munitions production, concentration camp guards, and even combat, a national socialist planned female component of Nazi Germany – Very Highly Recommended.

A unique and extraordinary contribution to the growing library of World War II literature in general, and women's roles within the Third Reich in particular, "Women of the Third Reich: From Camp Guards to Combatants" is a core and essential addition to community and academic library 20th Century Military History collections and supplemental studies reading lists.

This is an excellent book from the outset, I was really looking forward to this as I for some reason love reading about the younger generation in Nazi Germany. Reading about what their lives entailed, how they were treated and how much control the regime had over them and were they as easily controlled as the adult population was. I have read previously another book written by Tim Heath and I think what you get from his books is that they are always well written and they come across at the readers level rather than being superficial or too much into the detail, the balance is always struck at the right level.

WWII is clearly the authors' expertise and if you read his other books which cover the same time period, he is clearly informed and knows his stuff. He has written a number of books about girls and women in Nazi Germany, so you know your going to get a well informed and accurate text to read. Which always makes a good difference because the youth of Germany is a much forgotten piece of history of the time.

I would recommend this book to every reader, whether you are a student of history or not, as it is an excellent read and certainly worth a five star read.

From camp guards to combatants and typics to telephone operators, Heath shines a light on the experience and activities of women embroiled in the Third Reich.

This book is a bit more than the usual ‘Hitler stuff’ that sells books. It is actually a very well constructed narrative of the experiences of ordinary German women dealing with the times in which they lived. That necessarily required conformance with the political dictatorship. However many of the accounts by these women show that they acted as they did because they felt it right to do so in the interests of Germany in general. From the moral high ground of today, what some of them did cannot be excused but the recurring theme is that they did what they felt they had to. Of course it destroys the post war myth that most Germans were unaware of what was happening in all aspects of the Nazi regime. The book mixes detailed personal accounts with a light touch of direction and interpretation by the author which makes for a thought provoking experience in reading it.