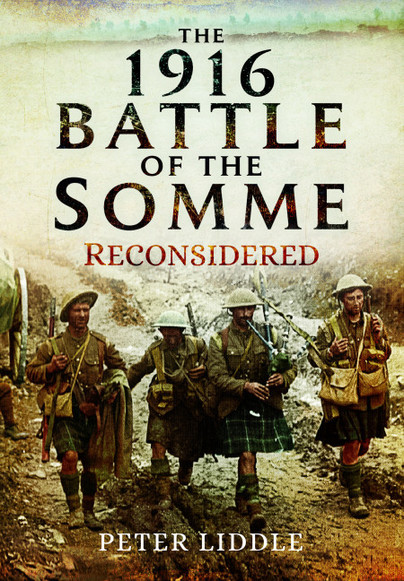 The 1916 Battle of the Somme Reconsidered (ePub)

Click here for help on how to download our eBooks
Add to Basket
Add to Wishlist
You'll be £4.99 closer to your next £10.00 credit when you purchase The 1916 Battle of the Somme Reconsidered. What's this?
Need a currency converter? Check XE.com for live rates

Twenty-four years after the publication of his classic study of the Somme, Peter Liddle reconsiders the battle in the light of recent scholarship. The battle still gives rise to fierce debate and, with Passchendaele, it is often seen as the epitome of the tragic folly of the First World War. But is this a reasoned judgement? Peter Liddle, in this authoritative study, re-examines the concept and planning of the operation and follows the course of the action through the entire four and a half months of the fighting.
His narrative is based on the graphic testimony of the men engaged in the struggle, not just concentrating on the front-line infantryman but also the gunner, sapper, medical man, airman and yes, the nurse, playing her crucial role behind the line of battle. The reader is privileged in getting a direct insight into how those who were there coped with the extraordinary, often prolonged, stress of the experience and maintained to a remarkable degree a level of morale adequate for what had to be endured.

Overall, this is a timely, refreshing and engrossing account of the Battle of the Somme and.- in turn - a valuable addition this story; however well covered it already is. The author puts forward the view that in 1916-17 terms, a British victory was won on the Somme. Although it was not one to be greeted with ‘bell ringing and bunting’, it was a victory with hindsight.  Equally, the determination and resolve of the soldier of the British soldier had not been broken.

Poignantly he adds at the end that 'a British victory was won on the Somme, not one to be greeted with bell-ringing and bunting..indeed one more approriately honoured by the draperies of mourning, but a victory neverthless'. Liddle further adds that the resolve of the British soldier was not broken by the Somme concluding quite rightly, ‘It his surely time for the 1916 Battle of the Somme to be reconsidered”.

With its broad conclusions and judgements made by Liddle, 'Somme Reconsidered' is probably the best approached as part of wider reading about the battle, rather than as an initial introduction (you could start with his original book). Personally I enjoyed this swift take on the battle and its aspects- and welcomed the author's refreshing and challenging opinions. Recommended reading for WFA members.

Peter Liddle has long been one of the most respected historians of the first world war, if not the most widely known.......and his much admired 1992 'The Somme; A Reappraisal' has been republished with considerable revision as 'The Somme Reconsidered'. He recounts the four and a half months' battle in digestible form, from a humane but unsentimental perspective and at times very lyrically. Peter Liddle's book is a constant reminder of context, not least of the times. And he is adamant:'In 1916-17 terms, a British victory was won on the Somme.

This is a reprint of an older book Peter Liddle did in the 1980s. Liddle was then working on forming an archive of WW1 material which is today with the University of Leeds. The book gives a good overview of the battle and includes material which was part of the archives, so many rare and previously unseen accounts and photographs. The ‘reconsidered’ part of the book is as Liddle examines the battle and considers it a victory, which in the 1980s was not a popular view – although he concedes it was certainly a costly victory. A good book and it is good to see it back in print.