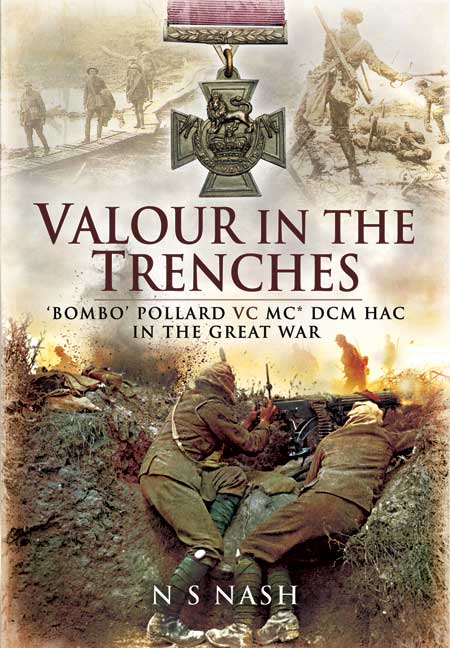 Valour in the Trenches (Hardback)

Add to Basket
Add to Wishlist
You'll be £25.00 closer to your next £10.00 credit when you purchase Valour in the Trenches. What's this?
+£4.50 UK Delivery or free UK delivery if order is over £35
(click here for international delivery rates)

Alfred Pollard joined the Honourable Artillery Company at Armoury House in the City of London in 1914 aged 21. The HAC is a unique Territorial unit composed entirely of middle class volunteers, who recruit all their officers from the ranks.

Pollard was a natural soldier who believed himself (correctly as it turned out) to be invulnerable. He revelled in combat and unlike the vast majority of his peers claimed to enjoy going into action. This extraordinary mindset is borne out by his well documented acts of selfless courage. He rose quickly through the ranks, earned a battlefield commission and was awarded in quick succession the Distinguished Conduct Medal, two Military Crosses and finally the Victoria Cross.

Despite his experiences and the horrific sights he witnesses, in his own memoirs, entitled Fire-eater, published in 1932, he made it clear he felt 'neither fear nor pity'.

Pollard's character was a curious mix of self assurance, even arrogance, and innate immaturity.

In post-war years Pollard wrote some 60 books which sold half a million copies.

This is a fascinating study of a courageous patriot who saw action throughout the Great War.


N.S. Nash in his well-written and very readable biography delves further into Pollard's life. Very enjoyable and well researched. Provides a detailed account of an extremely brave, patriotic and fearless soldier who felt 'neither pity nor fear'.

A must for all to read.

'Tank' Nash has expertly drawn on a number of sources to tell the story of Alf Pollard. Gripping and insightful narrative.