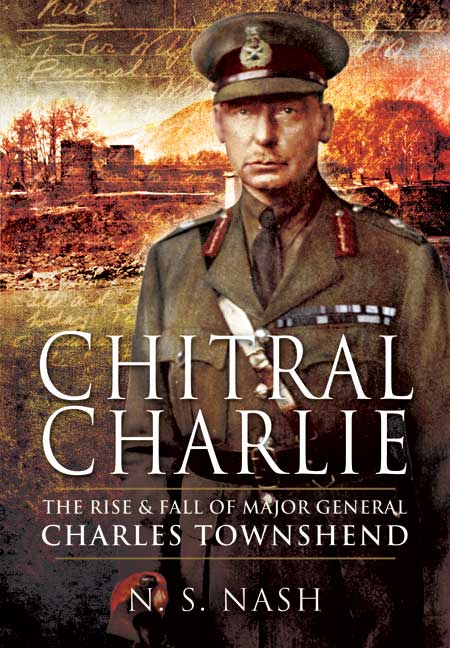 The Rise and Fall of Major General Charles Townshend

Add to Basket
Add to Wishlist
You'll be £25.00 closer to your next £10.00 credit when you purchase Chitral Charlie. What's this?
+£4.50 UK Delivery or free UK delivery if order is over £35
(click here for international delivery rates)

Charles Townshend achieved international fame, as a captain, when he commanded the besieged garrison at Chitral (now Pakistan) in 1895. As a result, he became known as 'Chitral Charlie'.

Decorated by Queen Victoria and lionised by the British public, his passage up through the Army was assured and, in 1916, he was given command on 6th Indian Division and sent to Mesopotamia. Here he won a series of stunning victories as his ill-supported division swept all before it in a devastating advance up the River Tigris. He triumphed brilliantly at Kurna, Amara and Kut but then, against all the tenets of military common sense, he advanced up the River Tigris to take Baghdad.

By now over-reached, he was confronted by a determined Turkish foe. His Division was depleted and exhausted. Townshend withdrew to Kut, where he was besieged and forced into a humiliating surrender. The mis-treatment of the British POWs by the Turks only added to Townshend's shame.

This fascinating and objective biography examines Townshend's controversial conduct during and after the siege and assesses whether his dramatic fall from grace and popularity was fair.

N S 'Tank' Nash CBE, is a retired brigadier. His highly amusing 'Sustainer' articles in military journals attracted a wide following. He is the author of K Boat Catastrophe (Pen and Sword, 2008). He lives near Edinburgh.


Since studying the Operation Market Garden from an early age, I have had a keen interest in military incompetence. Arguably, one of the most well-known military disasters was that of Arnhem. Whether Boy Browning was culpable has been debated ever since. On the other hand, modern historians nowadays accept that Arthur Percival could not have done much more than he did to save Singapore from surrender.

Yet perhaps the greatest military disaster to befall the British Empire was that of Kut. During the Great War British and Indian troops advanced in Mesopotamia – modern Iraq – against the Ottoman Turk. In command was Major-General Charles Townshend. Townshend had joined the British Army in the late Victorian period. It is interesting that he chose a military career, as he had a very keen interest in the theatre and performing arts, and liked moving in those circles.

It is probably surprising that Townshend managed to reach the rank of Major-General at all. He spent large periods on leave gallivanting around Europe and North America, and swapped cap-badges for a hobby. But perhaps worst of all, he had a nasty habit of alienating his superiors, and even officers who supported him soon grew tired of his obsessive letter writing. He was constantly hassling commanders for a better posting, or bemoaning his supposed ill-fortune.

So why did the Army not simply cut him off at a lower rank? Firstly, Townshend did serve in the Sudan under Kitchener, and on the North West Frontier in India. He was awarded a total of NINE mentions in despatches. Secondly, patronage still counted for much in the British Armed forces, and ability and potential were not always the final arbiter of a career.

Regulars will by now be fed up of reading my opinion of military biographies – ie, that they are mostly hopelessly inadequate. Yet this attempt by ‘Tank’ Nash is very fair. It bears no baggage, recognises Townshend’s service but also calls his indiscretions and weaknesses very accurately.

Townshend at first advanced into Iraq, pushing the Turk’s onto the back foot. Drunk on victory, he decided to stand at Kut, and await reinforcements. The reinforcements never arrived, and eventually, after a bloody siege, Townshend and his men were captured. Many of them died brutally, yet Townshend spent the rest of the war in luxury in Constantinople. Not only did he show little concern over his men, but when he returned home he could not understand why he came in for such criticism. Incredibly, he felt that he could act as an envoy to the Turks, and could not comprehend that the Army was keen to get shot of him as soon as possible.

Townshend has many similarities with Browning. Both had shown bravery early in the careers, but then spent time away from active soldiering, and hence were rusty when war came. And worst of all, both careers were driven by ambition and patronage rather than ability. And lost battles were the result.

The story of Charles 'Chitral Charlie' Townshend is an enthralling tale detailing a unique and turbulent military career. Townshend prematurely achieved hero status as a young captain - his decoration by Queen Victoria for his role commanding the besieged garrison at Chitral in 1895 gained him both his nickname and the adulation of the British public. Twenty years later, winning a series of stunning victories whilst in command of the 6th Indian Division in Mesopotamia, he and his men advanced with devastating and glorious effect up the River Tigris. It is at this point, however, that Chitral Charlie made an infamously disastrous decision - one that was to see him fall from grace in spectacular fashion. With the encouragement of a thoroughly incompetent superior, Charlie flew in the face of all military common sense and advanced his now depleted and utterly exhausted division forward from Kut. With the improbable goal of capturing Baghdad, the men were instead ungraciously forced into a humiliating surrender, events culminating in the brutal mistreatment of the POWs by their Turk captors. This comprehensive and objective biography draws on a variety of sources, including books by Townshend himself and two previous biographers, to give a full and vivid account of ineptitude in the high echolons that makes for fascinating reading. Containing a plethora of photographs, maps and illustrations, this book brings the events of almost a century ago to brilliant life, providing, perhaps, the last word on this fatally flawed military character.

Major General Charles Townshend was one of the more controversial British generals of the First World War. In 1915 he led a successful advance up the Tigris towards Baghdad, winning a series of impressive victories over larger Turkish armies. His progress finally came to an end at Ctesiphon, and he was then forced to retreat back down the river, making his stand at Kut. After a siege that lasted from November 1915 until April 1916 he was forced to surrender, and he and his men spent the rest of the war in Turkish captivity.

At a first glance at the facts Townshend shouldn't be so controversial - much of the blame for the failure of the campaign and the eventual surrender at Kut has to go to General Sir John Nixon, the overall British commander in Mesopotamia. The advance to Ctesiphon was well handled, the battles showed a great deal of skill, the retreat to Kut was skilfully done and the defence of Kut lasted for several months. Townshend remained popular with the men under his command, even after they had spent two years in fairly horrific circumstances in captivity.

The essential problem is that Townshend was 'pushy'. He was always agitating for promotions, moving between regiments and branches of the army and pulling strings with his many contacts. The chain of command was clearly not a concept he was happy with, but despite this he still managed to attract a number of influential supporters, amongst them Kitchener. Even when besieged in Kut he was still angling for a promotion! His reputation also suffers from his treatment as an honoured guest of the Turks, while his men were suffering, and his post-war support of the Turks.

Nash has produced an impressive biography of the man, tracing his military career as he moved between Britain, India, Egypt and the Sudan, including the siege of Chitrál that first made his name. I don't agree with all of Nash's conclusions and criticisms of Townshend, some of which perhaps tell us as much about the modern British army as about our subject (one example would be Townshend's attempts to pull strings to gain the promotions he wanted - this wouldn't be acceptable now, but was far more common in the late Victorian and Edwardian army, and was something that Churchill was equally adept at). Nash provides us with enough material to allow us to draw our own conclusions about Townshend, and has produced a well balanced biography of an able but irritating and eventually unlucky commander.

Charles Townshend achieved international fame, as a captain, when he commanded the besieged garrison at Chitral (now Pakistan) in 1895. As a result, he became known as ‘Chitral Charlie’. Decorated by Queen Victoria and lionised by the British public, his passage up through the Army was assured and, in 1916, he was given command on 6th Indian Division and sent to Mesopotamia. Here he won a series of stunning victories as his ill-supported division swept all before it in a devastating advance up the River Tigris. He triumphed brilliantly at Kurna, Amara and Kut but then, against all the tenets of military common sense, he advanced up the River Tigris to take Baghdad. By now over-reached, he was confronted by a determined Turkish foe. His Division was depleted and exhausted. Townshend withdrew to Kut, where he was besieged and forced into a humiliating surrender. The mis-treatment of the British POWs by the Turks only added to Townshend’s shame. This fascinating and objective biography examines Townshend’s controversial conduct during and after the siege and assesses whether his dramatic fall from grace and popularity was fair.

No student of military history, and particularly of the First World War, can be unaware of the Mesopotamia campaign of 1915-16 and of its early successes but disastrous and tragic end. Chitral Charlie is the latest biography of the principal in that campaign, Major General Charles Townshend, and tells in graphic detail the whole process of Britain's move to ensure the security of its oil supplies from Persia and to eliminate Turkey from the war. In telling the story of the campaign the author describes in detail Townshend's whole career, from his early days in the Sudan, twice, and the North-West Frontier, where he acquired a well-deserved reputation as a brave soldier, a good leader in action and a serious student of military history with its application to current events. But we also learn of Townshend's intense ambition for advancement in rank from the start of his career, both militarily and socially, his unbelievable arrogance and his unwillingness to listen to advice that didn't suit him or his personal plans. His use of contacts in high places who he could lobby for advancement earned him few friends and eventually ensured his failure to reach the heights he considered his due.
It is a book that is easy to read and not only about its subject, as it also describes the serious weaknesses in the British military command and logistic systems as well as in the management of military careers. Chitral Charlie is highly recommended, and not only for military historians.