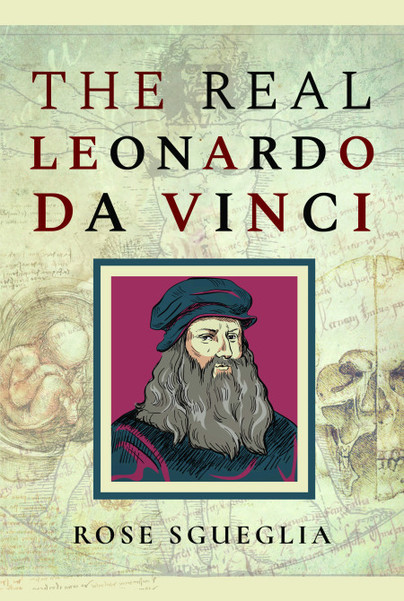 Add to Basket
Add to Wishlist
You'll be £15.99 closer to your next £10.00 credit when you purchase The Real Leonardo Da Vinci. What's this?
+£4.50 UK Delivery or free UK delivery if order is over £35
(click here for international delivery rates)

That’s probably why he wrote backwards from right to left to avoid smudging ink on his hand as he made notes on his latest works and visionary discoveries.

Words could only be read with the help of a mirror making it taxing for anyone but himself to quickly decode his handwriting.

There are many theories exploring the reason why he kept using “mirror writing” in all his manuscripts.

Some historians say that he was trying to make it more challenging for people to steal his ideas while others claim that it was a clever attempt to hide scientific findings from the intolerant Roman Catholic Church of the Renaissance.

Whatever the logic behind this, the constant association with mirror writing and studies on the human body anatomy, made him one of the most enigmatic figures of his and then of our century. This biography investigates Leonardo and his different roles from anatomist to inventor, architect, painter, rumoured to be templar and scientific pioneer.

Despite leaving several of his works incomplete, Leonardo managed to influence generations of artists and still today remains a highly regarded figure in both the artistic and scientific sector.


The Real Leonardo Da Vinci is a fascinating account of the man whom she says was "an insecure genius who could paint beautifully but who would also leave most things unfinished and still, today, I am not 100 per cent sure why."

This is one of those books that makes you realise how little you knew before you started. It is written with a warmth that feels like an invitation to share the author's admiration and affection for such an incredible man. The invitation isn't needed though, as Leonardo Da Vinci's life, skills, and achievements speak for themselves and draw you in. I thoroughly enjoyed this book and getting to know "The Real Leonardo Da Vinci".

This was a really interesting biography about a man that I've always been curious about. I've read quite a few biographies about Leonardo da Vinci but none of them were as upfront about his sexuality as this one... I learned a lot from this book, which is always great to get from a non-fiction!

Fascinating book about an more fascinating man. Most of us will have heard of Da Vinci but who he was as a man is well detailed here. Anyone who is studying or wants to know more about the great man should certainly start with this book.
I thoroughly enjoyed the way the book was written and proportioned.

The myth and the real man has been looked at with a wide lens as the writer tries to link the two to form the life of Leonardo Da Vinci, From a lowly start as the illegitimate son of a lawyer and the death of his beloved grandfather, Leonardo relocates to Florence to learn a profession. Without prior expectations, he was free to pursue his own path. A fascinating glimpse into his world of art, anatomy, homosexuality and discovery.. Set in the crossfire of Rome versus the Renaissance, this book is very well written and gives us many clues about Leonardo..

It is easy to read with intriguing facts that will captivate those who are new to da Vinci’s story. There is something intriguing about looking at the man behind these masterpieces and I think Sgueglia does an excellent job of showing a unique side of this artist’s life. If you want a great book that will introduce you to this polymath’s life and times, I recommend you read, “The Real Leonardo da Vinci” by Rose Sgueglia.

I really enjoyed this book on Leonardo’s fascinating life! He was such an incredible figure! Many books based on his life are quite long & boring. This author, however, summarizes his life into a simple and easily understandable form. I read the entire thing in a night!... I thoroughly enjoyed this biography.

Rose Sgueglia is a writer, journalist and marketing consultant based in Cardiff. She is the founder of Miss Squiggles, a digital magazine and content agency. Her work has been published in different publications including GQ, La Repubblica, Yahoo and WI Life (a magazine for members of The Women’s Institute). She holds a BA in Journalism, Film and Media and a Post Graduate Diploma in Magazine Journalism from Cardiff University. She is currently working on her PhD in Media Studies with a research project on the impact material culture and audio-visual material has had on Chanel.