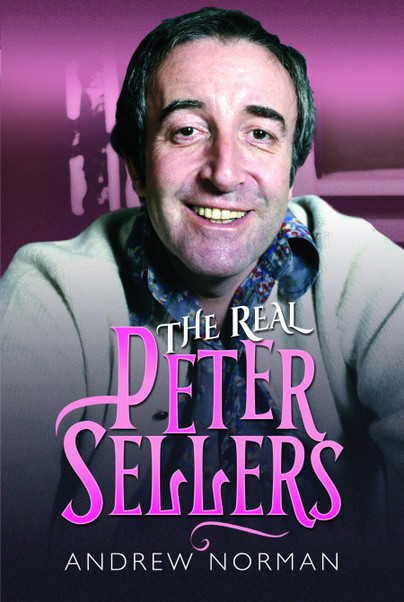 Add to Basket
Add to Wishlist
You'll be £20.00 closer to your next £10.00 credit when you purchase The Real Peter Sellers. What's this?
+£4.50 UK Delivery or free UK delivery if order is over £40
(click here for international delivery rates)

Throughout the world, people regard Peter Sellers purely as a comedic genius: surely, one of the greatest ever to have lived. But, the astute observer will notice that he always appeared to be acting, even when being interviewed. So, who was Peter Sellers?

Sellers once said, ‘I could never be myself you see. There is no “Me”. I do not exist. There used to be me, but I had it surgically removed’. Clearly, this was not intended to be taken literally. Instead, the inference is that somehow, he had lost his sense of identity.

To discover the real Peter Sellers is no easy task, and when we do, what we encounter is a totally different persona from the comedic characters that he portrayed on the screen.

Sellers had celebrity status: a succession of beautiful wives; immense wealth; magnificent motor cars; expensive yachts; a house in Mayfair, and various palatial residences. But far from being happy, he was plagued by self-doubt; ambitious, but never satisfied. And so, he resorted to superstition, clairvoyance, and drugs to get himself through the day.

For all Sellers’ worldwide fame as ‘Inspector Clouseau’, many regard the film Being There, in which he played the character ‘Chance’, a gardener, as his masterpiece. In fact, the film was a damning indictment of the false god of materialism.

Sellers’ obsession with the character of ‘Chance’, makes it seem likely that this was the kind of person he aspired to be, and wished that he had been.

Superb look at the unique genius of one of our most celebrated comedians.