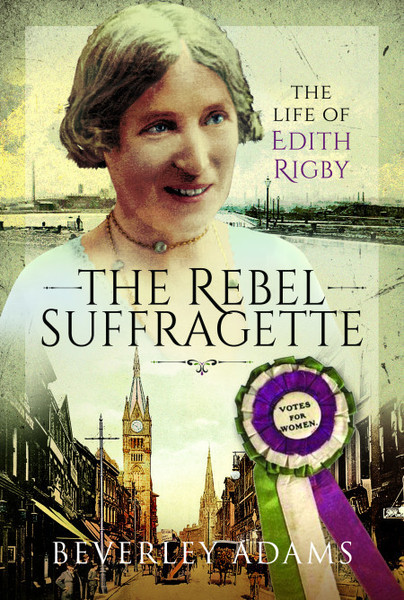 The Life of Edith Rigby

Add to Basket
Add to Wishlist
You'll be £15.99 closer to your next £10.00 credit when you purchase The Rebel Suffragette. What's this?
+£4.50 UK Delivery or free UK delivery if order is over £35
(click here for international delivery rates)

The suffragette movement swept the country in the late 19th and early 20th centuries. Led by the Pankhursts, the focus of the movement was in London with demonstrations and rallies taking place across the capital. But this was a nationwide movement with a strong northern influence with Edith Rigby being an ardent supporter. Edith was a controversial figure, not only was she was the first woman to own and ride a bicycle in her home town but she was founder of a school for girls and young women. Edith followed the example of Emmeline Pankhurst and her supporters and founded the Preston branch of the Women’s Social and Political Union. She was found guilty of arson and an attempted bomb attack in Liverpool following which she was incarcerated and endured hunger strike forming part of the ‘Cat and Mouse’ system with the government. During a political rally with Winston Churchill Edith threw a black pudding at a MP.

There are many tales to tell in the life of Edith Rigby, she was charismatic, passionate, ruthless and thoroughly unpredictable. She was someone who rejected the accepted notion of what a woman of her class should be the way she dressed and the way she ran her household but she was independent in mind and spirit and always had courage in her own convictions. As a suffragette, she was just as effective and brave as the Pankhurst women. This is the story of a life of a lesser known suffragette. This is Edith’s story.

As featured in Keighley News:


The Rebel Suffragette, focuses on the life of Edith Rigby. Edith established the Preston branch of the Women’s Social and Political Union and was a highly controversial figure. Convicted of arson and an attempted bomb attack in Liverpool, she was incarcerated and endured a hunger strike. And during a political rally, Edith threw a black pudding at an MP!

Diane Park, of Wave of Nostalgia, said she was delighted that the shop would be hosting Saturday’s event – on National Bookshop Day. “We promote inspirational women in our bookshop and Edith is a great example,” she added. “Beverley has written a fantastic book. Edith was such a champion."

There are the well-known faces of the UK's suffragette movement in the late 19th/early 20th centuries such as the Pankhursts, Emily Wilding Davison, & Annie Kenney, but there were many more women who campaigned beside them. One of them was Edith Rigby, controversial, spirited, opinionated, kind, compassionate, & loyal. Born in Preston, Edith founded the Preston branch of the Women's Social and Political Union, & was imprisoned & braved the hunger strikes to campaign for women to have the right to vote.

This was an informative read about a woman I had never heard of before. Edith was definitely a fascinating woman & was a vital part of the campaign. Apparently there is comparatively small amounts of evidence about her beliefs & works, therefore some of the chapters moved onto other related subjects, such as how the female members of the Royal Family felt about the suffrage movement, etc. It was also interesting to read a more detailed view on the men who supported women's suffrage, as they can sometimes be forgotten about. I thoroughly enjoyed reading about Edith & her fellow suffragettes.

A truly incredible book that tells the story of a suffragette: Edith. With insight, honesty, compassion, this is a really interesting book that is sure to be a hit for anyone interested in history.

This is an interesting biography which tells the story of Edith Rigby sympathetically, but analyses the role of the militant suffragettes, and whether their acts of vandalism and violence were justified. Edith didn't want to just play the role of middle-class housewife, because she grew up amongst mill workers and the poor in Preston, even though she came from a well-off family, and she wanted to help them. She established a school for working-class girls, which was extremely popular, but the role of suffragette was made for her. Edith campaigned for the cause, but she felt that it wasn't getting anywhere, so she started committing violent acts. She committed arson, and she was found guilty of an attempted bomb attack in Liverpool. She also threw black pudding at an MP! She went to jail several times, enduring force feeding, and going on hunger strike.

Charles, Edith's husband, who was a well-respected doctor, supported her all through this, even writing letters about her plight to the papers. Although very long-suffering, he got a bit upset if he had trouble getting meals after a day at the surgery. Edith disappeared a few times for reasonably long periods, which he found difficult. At one stage, she worked as a maid at an upper-class house for a week!

This biography includes a chapter on the role of men who supported the cause. They have had short shrift before now, so I was pleased to see a discussion of their role. The book also includes a summary of women's rights until the present day.

I enjoyed this book. Although I don't agree with Edith's militancy, she seems to have been very likeable, and I liked learning about another suffragette.

I enjoy social history and I’m interested in the suffragette movement and how it’s shaped today’s society. Edith Rigby is one of the lesser known individuals and Beverly Adams research from seemingly very limited source material is amazing. Edith wanted more than domesticity and despite marrying a Doctor and perhaps enjoying the benefits of a more comfortable life, her own experiences and background drew her to the cause of women’s suffrage and she became actively involved.

I was drawn to this book by the title as I had not heard of Edith Rigby and was interested in what Beverley Adams believed made her a rebel suffragette. I had thought of all the women involved in fighting for the women’s vote as rebels, after all, they were seeking to undermine the political power men exerted (well, some men) through the ballot box, and ultimately in parliament. However, I soon realised that Adams was indeed right to describe Edith Rigby as a rebel, denoting her as special in her adoption of the cause for women’s voting rights, and others she espoused. I also regret having been in Preston for a conference and not realising that in that city there were remnants of a history that I would have been thrilled to learn.

Beverley Adams acknowledges that there is limited information about Edith Rigby and has accordingly set her story in the context of general suffragette and suffragist history, the context of Preston and its industrial environment, World Wars 1 and 2, and Edith Rigby’s activities after the women’s vote was achieved. The material she has is not only absorbing, but also dramatic in parts, providing a story of the way in which her family reacted to her activism, including her husband’s steadfast support, and although acknowledging and describing well known activists, does not give them centre stage. Edith Rigby’s story becomes part of the history of the time, weaving women’s responses to women’s activism on their behalf, wider historical events, and domestic concerns in a thoroughly engaging narrative...

There is an index and a further reading list. In addition, there is a useful debate and discussion about the way in which the suffragettes used violence to achieve their aims. This is a strong depiction of one woman who fought for British women’s voting rights, as well as a briefly observed, but useful, political, and economic history of the time.

I think this is a really worthwhile biography - Edith was clearly a fascinating woman and I greatly appreciated being able to learn about her place in the suffrage movement. I've seen the picture of her being removed from the gates of Parliament and had no idea who she was!

VOTE FOR WOMEN? PREPOSTEROUS!!
At least, so believed the government and many men of the day.

In many a backward place, women have been second-class citizens for centuries untold, but they kept their peace, until...Enter the Suffragettes!

This book takes a fascinating look at the almost 100 year battle to achieve the right for women to vote on equal basis as men. The campaign, Vote for Women, raged throughout the United Kingdom, propelled by courageous, determined and self-sacrificing women who had had enough of all the injustices perpetuated towards women. The voting right realized would be symbolic towards bringing about the necessary changes.

Among the women who upheld this cause was the plucky, intrepid Edith Rigby. This biography of her role in this fight is representative of many like her who endured arrest, police brutality and abuse within the prison systems. This "crusade" towards equality with men continues to this day as author Beverley Adams spells out in her book, The Rebel Suffragette.

Beverley Adams was born and raised in Preston, Lancashire. She gained her BA (Hons) in English Literature and her MA in English with The Open University. Her interests include history, in particular local history, reading, travel and following Preston North End Football Club. She works in the Private Sector and this is her first book.