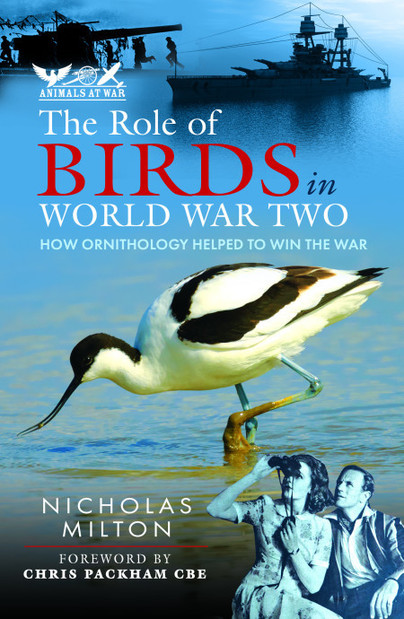 The Role of Birds in World War Two (Hardback)

How Ornithology Helped to Win the War

You'll be £25.00 closer to your next £10.00 credit when you purchase The Role of Birds in World War Two. What's this?
+£4.50 UK Delivery or free UK delivery if order is over £40
(click here for international delivery rates)

A love of birds has always been an important part of the British way of life but in wartime birds came into their own, helping to define our national identity. One the most popular bird books ever, Watching Birds, was published in 1940 while songs like There’ll be Bluebirds over the White Cliffs of Dover epitomized the blitz spirit. Birds even featured in wartime propaganda movies like the 1941 classic The First of the Few starring Leslie Howard where they inspired the design of the Spitfire. Along the coast flooding to prevent a German invasion helped the avocet make a remarkable return while the black redstart found an unlikely home in our bombed-out buildings.

As interesting as the birds were some of the people who watched them. Matthew Rankin and Eric Duffey counted seabirds while looking for U-boats. Tom Harrisson, the mastermind behind Mass Observation, watched people ‘as if they were birds’ while POW Guy Madoc wrote a truly unique book on Malayan birds, typed on paper stolen from the Japanese commandant’s office. For Field Marshall Alan Brooke, Britain’s top soldier, filming birds was his way of coping with the continual demands of Winston Churchill. In comparison Peter Scott was a wildfowler who was roused by Adolf Hitler before the war but after serving with distinction in the Royal Navy became one of the greatest naturalists of his generation.

With a foreword by Chris Packham CBE The Role of Birds in World War Two is the story of how ornithology helped to win the war.

“A must read for anyone with an interest in World War Two history and/or ornithological history.”

From the avian origins of the Government’s Mass Observation programme to record everyday life in Britain, to military personnel and Prisoners of War enjoying birdwatching in times of adversity, this book explores the numerous ways in which birds had an impact in the Second World War.

'HATS off to historian-ornithologist Nicholas Milton for this
entertaining account of the role of birds and birdwatchers
during the 1939-45 war...A word, too, for the book's range of illustrations, which excellently complement the text, and the superb jacket design by Paul
Wilkinson.'

The book is well-researched and easy to read. It is amusing in places, educational in others & I would definitely recommend it bird lovers but also to anyone with an interest in WW2.

Did studying birds really help us to win the 1939-45 war?
It seems a fanciful thought, but author Nicholas Milton makes an excellent proposition for it in a new book...
full review here

This interesting book looks at the role of various birds during World War Two, but the book also looks at the relationship between humans and birds during the war. Birds were used for numerous benefits during the war but especially used in films and books in varying locations as a patriotic symbol. Depending on where you were, you could be having contact with birds from all around the coast or at sea during fighting and convoys, you’ve also got soldiers having to have contact with birds on land and in different countries.

Now I’ve never been a bird watcher or anything close, but the title of the book intrigued me, and I’m really glad I got to read it as it was an interesting book and much more than you think it’s going to be. I actually feel like I’ve learnt a lot more, not just about war but a lot more about birds and the positives in little ways they bought during wartime. I would certainly recommend buying this book as it is a little out there but a really good and unusual read.

The Role of Birds in World War Two by Nicholas Milton is a wonderfully entertaining and informative book that highlights the important role of the everyday, in this case birds, in raising morale during difficult times.

When I mentioned this book to a friend her first response was about pigeons. Admittedly, that was among my first thoughts as well. Milton goes far beyond just those birds directly involved in the war effort. Combining popular culture references with stories involving birds (and often other important humans) we learn just what birds meant to people.

I am not a birdwatcher hobbyist but, like so many others, I am easily captivated when I have an opportunity to observe a bird closely or a group of them going about their business. The pandemic, in much the way the war did at that time, has raised my awareness of these simple pleasures. This book shows that birds, and nature in general, are far more important to our lives than we sometimes realize.

I would recommend this to both bird lovers and those who like to read about the home front during wartime. The writing is engaging and the information is often surprising.

The British Expeditionary Force sent to France in the late summer of 1914 has been referred to as ‘The Best British Army Ever Sent to War’ as it was one of the most highly trained and disciplined forces in the world. It was also the ‘Best Birdwatching Army Ever Sent to War’ for among its ranks were hundreds of both amateur and professional ornithologists. When not fighting many soldiers turned to birdwatching as a way of whiling away the long hours spent on guard duty or watching over ‘no man's land’. As a result, the hobby ranked as one of the most popular past-times for soldiers…

Click here to buy both titles for £41.00
More titles by Nicholas Milton