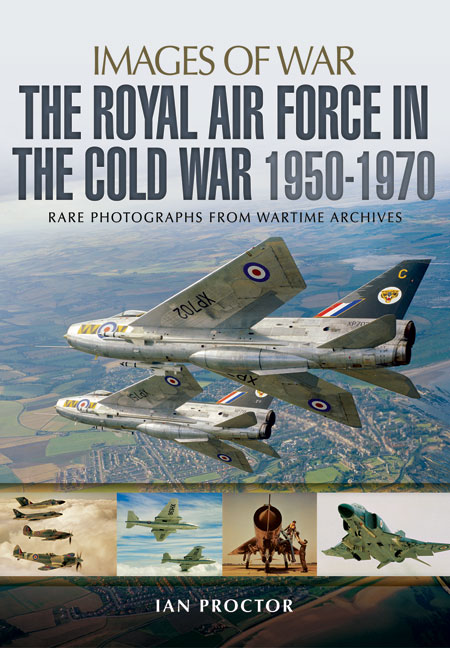 Soon after the Second world War, wartime allies became Cold War adversaries, and by 1950 the perceived threat of a Soviet strike on Western Europe or Britain dominated military planning. For the next forty years, the Royal Air Force was in the front-line of the Cold War. In Britain and Germany, light bomber crews exercised in preparation for a future conflict, while interceptor pilots stood by ready to counter incursions by Soviet aircraft. Between 1956 and 1969, the elite crews of the iconic V-Force of nuclear bombers trained to perform the ultimate mission, striking targets deep in the heart of Russia. Protecting British interests overseas, personnel at stations across the Middle East and Far East were regularly engaged in supporting operations during the many colonial conflicts which occurred throughout the 1950s and 1960s.

Undertaking these duties were new British-designed aircraft introduced to squadrons from the early-1950s. The names of these extraordinary aircraft, which included the Hunter, Lightning, Vulcan and Canberra, became synonymous with the Cold War.

In this book, Ian Proctor uses over 150 highly evocative colour images from a single remarkable Air Ministry collection to portray the RAF and its personnel between 1950 and 1970. He provides a selected insight into service life, the aircraft, recruitment and training, and the operations and exercises undertaken by the RAF during a twenty year period of the Cold War.

...amazing photos, is a tribute to the RAF-time in de cold war between 1950 and 1970 and the beauty of aviation from that time. ... photos have a format of A5 and larger, in combination with the colour scheme, I find very beautiful and contribute to the quality of this book.

Overall, a fascinating book, with something for anyone who lived through the Cold War or has an interest in the subject. It is of particular interest to aircraft historians and enthusiasts and to those who served in RAF / WRAF during the Cold War, like Copepod's Aunt.

Reviewed by Copepod & Copepod's Aunt, who served in the WRAF during the Cold War at Rear Party

This volume contains good colour prints on almost every page with lengthy captions that have replaced the originals. With current kit, the original negatives have been enhanced and the result is spectacular.

For a reasonable price, an album has been produced for readers to drool over.

Only a small percentage of these colour shots have been previously published. They cover personnel and aircraft - in order to whet the appetite. The text provides background and each illustration has a comprehensive caption. There is also an equally detailed index. This is a delightful book to dip into, and it is to be hoped that the author will now look at earlier and later negatives and prepare another.

An addition to the Images of War series contains 192 pages, mainly with colour photographs of aircraft and personnel of the Royal Air Force during a period when the Cold War was always threatening to warm up... The photographs are well-chosen and make this book a useful compendium.

With well-captioned photos throughout, this is a book that jogged many memories for me, and I am sure will do so for many others. For younger aircraft enthusiasts, it gives some fine coverage of the RAF during the Cold War, a time when so much change took place and when some classic aircraft were in RAF service.