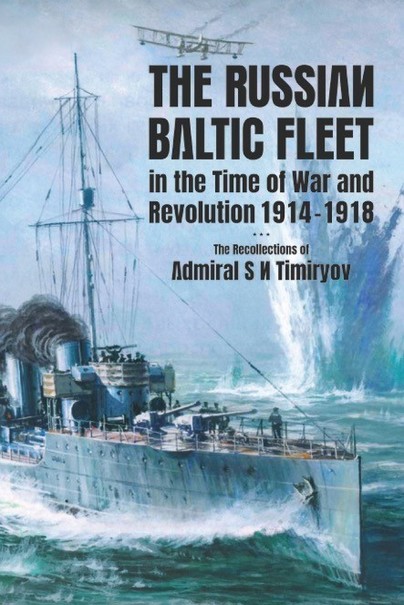 Add to Basket
Add to Wishlist
You'll be £17.50 closer to your next £10.00 credit when you purchase The Russian Baltic Fleet in the Time of War and Revolution, 1914–1918. What's this?
+£4.50 UK Delivery or free UK delivery if order is over £35
(click here for international delivery rates)

This is a fascinating account of a little-known period in the history of this historic navy.

An excellent addition to the historiography of the Imperial Russian Navy during the twilight of it's existence.

A key resource for scholars of the Baltic Fleet and naval aspects of the Russian Revolution.

This excellent book is a fascinating and extremely engaging read which is very highly recommended.

Taking the vivid recollections of Timirev, the translator, Stephen Ellis, has done an excellent job in producing an accessible narrative, which he has complemented with extensive explanatory notes and commentary, contemporary obituaries and a foreword by Professor Norman Saul.

I found this an utterly fascinating read, and extremely engaging which can be a challenge for some memoirs written by senior officers. In this Ellis is to be warmly congratulated.

This book is a valuable addition to the library of those interested in WWI naval history and the war in the Baltic. The coverage of Russian operations, command structure dynamics and their impact on operational capability makes it worthy of recommendation to ANI members.

I finding that I am greatly getting into war on the sea through warships, u-boats and the commanding officers. There is a great deal of difference compared with their counterparts in the air or on the land. This excellent read gives a very good account of the events in the Baltic. This book offers a good glimpse in the difference between leadership and you common sailor, as we quite a few instances of mutiny as bolshevism increased its presence within the ranks. This is a very good book and I enjoyed how you get a more personal look at life from the man, and this is bought over well in the translation of his work. A really good read and I would recommend this as one of the books I have read and have got into the subject.

This is a virtually unknown set of memoirs that are published for the first time in English, the edition published in 1961 by the American Society for Russian Naval History having been in the original Russian. The memoirs provide a unique view of the Russian Navy during the First World War and the Revolutionary Wars – Valuable Rare Source Material

The First World War at sea in northern waters is often portrayed as a purely German and British affair but the Russian Baltic fleet saw frequent and at times desperate action against Germany. Vividly written in Shanghai in 1922, this memoir remained unknown for several decades until its publication (in Russian) in New York in 1961. Translated into English by naval historian Stephen Ellis, it offers unique insights into the characters of key figures Rear Admiral S N Timirev met during his years of service. Timirev was well placed to make observations on the operations of the Baltic Fleet from 1914 up to 1918. He had trained alongside many of the commanding officers and fought in the Russo-Japanese War of 1904-05 and the siege of Port Arthur with them. This edition is complemented by extensive notes and commentary. A spotlight on the Russian mind-set in home waters and engaging account of Russian naval operations in general during these formative years of the First World War and the Russian Revolution.

This book offers a good account of events in the Baltic and through to the revolutions in 1917, offering an insight into those significant events against the background of conducting naval warfare. It is a very personal account, written soon after the events described (in 1922) and adds value to the seldom measured efforts of the Russian Baltic Fleet in the Great War. The author’s descriptions of the behaviour of mutineers as the fabric of the Baltic Fleet essentially collapsed as revolutionary activity increased, is well worth reading as a lesson of the failure of authority and the rise of the mob. This is further expanded after the Bolsheviks took control and created impossible conditions for the fleet to function. Overall an interesting read written by a witness to the events.