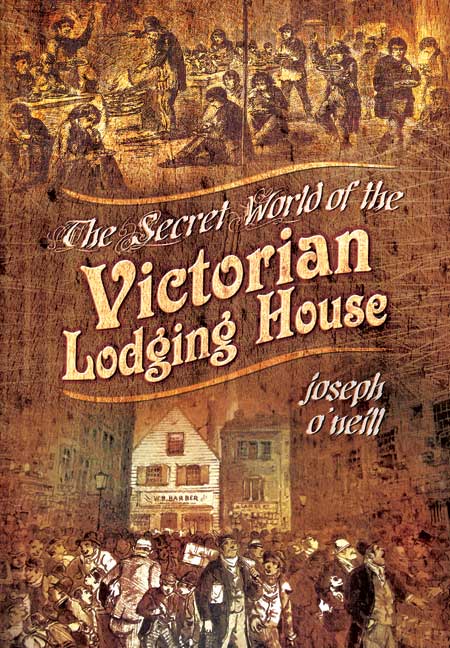 The Secret World of the Victorian Lodging House (Hardback)

Add to Basket
Add to Wishlist
You'll be £19.99 closer to your next £10.00 credit when you purchase The Secret World of the Victorian Lodging House. What's this?
+£4.50 UK Delivery or free UK delivery if order is over £35
(click here for international delivery rates)

Criminals, drifters, beggars, the homeless, immigrants, prostitutes, tramping artisans, street entertainers, abandoned children, navvies, and families fallen on hard times – a whole underclass of people on the margins of society passed through Victorian lodging houses. These places were to be found in almost every city and town and they were central to working class life.

The Jack the Ripper murders of 1888 brought lodging houses to the attention of an appalled public and, labelled seedbeds of infectious disease, they were seen as training schools for criminals and conmen of every description. The reality, however, was more complex as lodging houses also provided for those scratching a living, and sheltered those who refused to enter the workhouse.

Joseph O'Neill's fresh research into this lost world of the 'night-time havens of the wandering tribes' flings open the door to the nineteenth century lodging house, and tells the forgotten stories of those who spent their nights sharing beds with bugs, thieves, and much worse...

'His achievement in applying imagination to the historian's meticulous research produces something rare and true and graceful... recalls The Suspicions of Mr Whicher'

Joseph O'Neill's conjures up the sights, sounds and smells of a lost age'
Manchester Evening News

A gripping read, it is well researched and full of interesting information, setting lodging houses in their context so that we learn a great deal about the life and accommodation of the poor during this period.

Joseph O’Neill has written a book that should knock those who have a golden sepia view of the Victorian era, [i]The Secret World of the Victorian Lodging House[/link] breaks down those ideals. For those of us who have studied social history this book is a reminder of how bad things were, and for the general reader will open their eyes.

What the reader will learn is that the Victorian lodging house was no romantic place, but a place where you would need to sleep with at least one eye open, and a hand on your possessions. The lodging house sometimes reminds me of the song from Les Miserables ‘Master of the house’ where he breaks down the price for sleeping with a window shut and always looking to lighten your loads and more.

What you learn from this book is that the underbelly of society passed through the lodging house, mainly the criminal elements, beggars, immigrants, prostitutes, street entertainers, navvies, the abandoned and families that were just about avoiding the workhouse. The book explains the harshness of the places and uses examples of known lodging houses, such as those that were in Britain’s worst slum Angel Meadow (do not be fooled by the name) in Manchester. Also drawing those from the worst areas of London, Birmingham amongst others.

Every town and city of the time had a lodging house or more in its borders and all had the same reputation of ill repute not the sort of place you would want to take your family. As terrible as these places were they were a step above poor relief and prison, but it was not a very large step.

This really is an interesting book that covers many areas and also explains the foundations of the NSPCC and the Peabody Trust for example as well as places such as Port Sunlight as a response to the horrors of the Lodging House. As well as explaining how the introduction of the Public Health Acts came about in effect as an answer to the insanitary aspects of the lodging houses and the slums where they resided.

What you get from this book is that the ill treatment of immigrants is nothing new and we have been doing it for centuries, and the treatment of the Irish, Italians and Jews are just some of the examples that highlight this in the book. As well as the crimes that surrounded the lodging houses which really will open your eyes.

This truly is an excellent book, well researched and a book you can come back to time and time again, especially if you are studying social history and history from below. A fascinating and totally absorbing read and one that will leave an impression on you about life if you were at the bottom of the heap of humanity.

A fascinating easy read, useful for those who want to learn about living conditions in the towns and cities in Victoria's reign and historians who find their ancestors were lodgers and want to embroider their family history narratives.

Joseph O'Neill's book, The Secret World of the Victorian Lodging House, covers a fascinating topic. The author has researched his subject well and each chapter covers an aspect of life in these houses with the subject matter introduced in a brief anecdote.

The book serves well as a social history and will go a long way in fleshing out the lives of ancestors who endured a migratory existence, or lodged in a lodging house, or lived in a workhouse. The book has a very good subject index and bibliography.
There are a number of drawings and photographs in the centre of the book which give a nice perspective to aspects of the conditions and hardships endured by the poor and working classes.

This book gives a good springing point for research into facets of life of the poorer classes in the 19th Century.

The author of this useful work grew up during the 1950s among 14 Irish lodgers in one of the last lodging houses of its kind and he does full justice to his subject. He explains why the number of lodging houses grew so rapidly during the Victorian period. He also describes the attempts to regulate them by the Common Lodging House Acts of 1851 and 1853 and the competition from charities and philanthropists keen to thwart their evils... There is much interesting detail about the lodging houses and Victorian street life.

The author has painted a strong and colourful picture of the Victorian Lodging House that will be a revelation for many readers.

A ground-breaking and lively study of lodging house life.
The book is packed with case studies, and O'Neill typically begins each chapter with a short, fictionalised imagining of the circumstances of the particular individuals he writes about.

As seen in the 'Irish Times'.

As seen in the 'Morecambe Visitor'.

O'Neill's painstaking research...brings to life the lost world of the lodging houses...

A primer for the general reader who would like to get a handle on the doss house that was so central to so many lives in Victorian and Edwardian England.
Warmly recommended.

Writer and broadcaster Joseph O'Neill - raised in a Manchester lodging house owned by his parents in the 1950s - lifts the lid on the rows of back street houses that were transitory homes for thousands of men, women and children in the 19th century...In this fascinating, brutal and revealing book, O'Neill brings us a riveting account of hardship, squalor and inevitable violence...but it is also a heart-rending tale of determination, pride, camaradarie and survival. O'Neill's painstaking research into the 'night time havens of the wandering tribes' brings to life the lost world of the lodging houses and their eclectic inhabitants...

Details a whole underclass of people on the margins of society who passed through the Victorian lodging houses - from criminals and the homeless to prostitutes, abandoned children, street entertainers, and families who had simply fallen on hard times. O'Neill's fresh research into this fascinating lost world flings open the doors of the nineteenth century lodging house and tells the forgotten stories of those who spent their nights sharing beds with bugs, thieves and much worse.

[A] valuable contribution in an under-studied area.