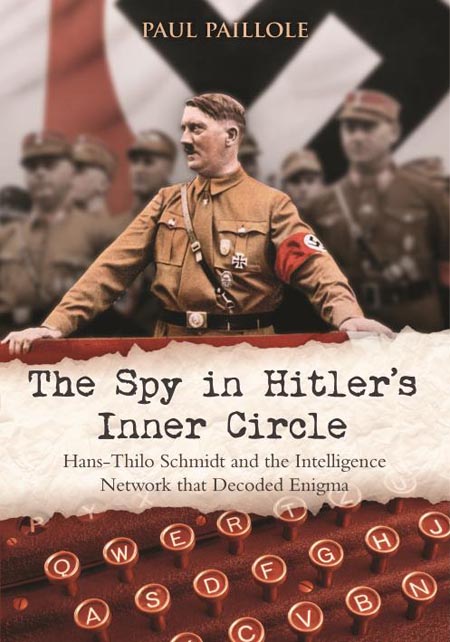 Hans-Thilo Schmidt and the Intelligence Network that Decoded Enigma

Add to Basket
Add to Wishlist
You'll be £25.00 closer to your next £10.00 credit when you purchase The Spy in Hitler’s Inner Circle. What's this?
+£4.50 UK Delivery or free UK delivery if order is over £35
(click here for international delivery rates)

Ten years after the publication of his Services Spéciaux (1935-1945) , Paillole took up his pen once again in order to shed further light on the critical role that the French Secret Service played in the infiltration of German agencies. In this first English edition of The Spy in Hitler’s Inner Circle, Paillole brings us to the very heart of the world of espionage and counterintelligence, providing unique insight into the key figures that led to the decoding of the Enigma machine at Bletchley and the ultimate collapse of Hitler’s Third Reich, most notably through Hans-Thilo Schmidt, France’s German spy embedded in the very heart of the Third Reich.

In compelling narrative style Paillole details how Schmidt delivered intelligence to France right from the source of the German Cipher Office. Schmidt, whose brother Rudolf occupied one of the highest postings in the Third Reich, commander of 2nd Panzer Army in Russia, created an intelligence network between France, Poland and England, and successfully transmitted crucial details about Hitler’s strategic plans. From information about Germany’s rearmament and the reoccupation of the Rhineland, to fundamental technical intelligence about the Enigma machine, Schmidt’s contributions are key to the Allied victory in the intelligence war, despite the fact that France largely ignored his communications.

Revealed here are the most secret aspects of the ‘secret war,’ the ‘war of numbers.’ Paillole also sheds further light on the interaction of secret agents working inside the German government, bringing attention to the cooperation between the French, English and Polish agencies surrounding the challenges of decoding the Enigma machine. We learn the innermost details of the roles that men such as Gustave Bertrand, Rudolphe Lemoine, and Richard Sorge played in this dramatic history and ultimately the pivotal role that Bletchley’s Alan Turing was able to perform as a result.

Paul Paillole joined the French army in 1925 and was transferred to the Secret Services in 1935. Although initially reluctant to be desk-bound he rapidly excelled at the job. At the outbreak of the war Paillole was prominent in the active counter-espionage branch, the 5th Bureau. After the defeat of France in 1940 he led a clandestine counter-espionage network which operated from Marseille under the codename ‘Travaux Ruraux’, whose role was to arrest German collaborators, though the reality may have been murkier. Operating at the heart of the Vichy regime, he was a key figure in dealings between the Vichy government, the Germans, the Allies, and the French factions vying for post-war power. He wrote two books, one about his own experiences, and this one about the Hans-Thilo Schmidt affair which he witnessed at first hand. He died in 2002.