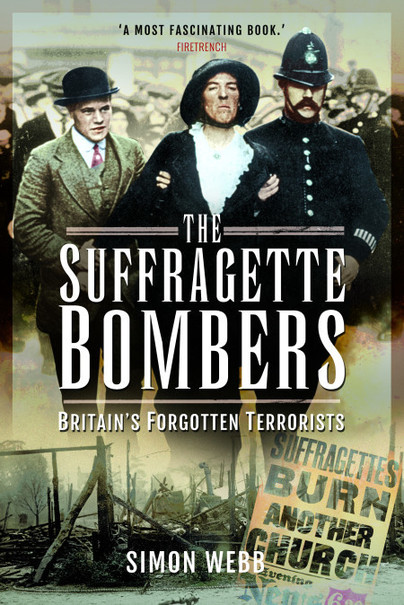 You'll be £14.99 closer to your next £10.00 credit when you purchase The Suffragette Bombers. What's this?
+£4.50 UK Delivery or free UK delivery if order is over £35
(click here for international delivery rates)

This was a really unique read, I enjoyed learning about the Bombers in Britain. It was really well written and felt like this was something that I hadn't heard of before.

The Suffragette Bombers by Simon Webb – Britain’s Forgotten Terrorists – is a book on a controversial topic. It’s not the first book by Webb in which he tackles the idea of the link between women’s suffrage and the militant actions of the suffragettes, but it is focused on their attacks, which is fascinating. In this book he touches on their views and gives accounts written by the suffragettes themselves, in their books or from their speeches.

I found it absorbing and interesting and learnt much about the politics and historical context of the time. Webb writes fluently and persuasively and the book is extremely well researched... This book was very thought provoking and made me think about the Suffragettes through a very different lens - I enjoyed reading it and would recommend to anyone interested in this period.

Simon Webb artfully interweaves analysis and history in his monograph, The Suffragette Bombers. Through a unique and fresh narrative standpoint, he delves deeper into the Women's Social and Political Union and their terrorist campaign. Suffragette and terrorist are not usually two words I would usually associate with each other, but as Webb argues, they are not mutually exclusive. He further points to connections between this organization to fascism and conservative politics, which was absolutely fascinating and unlike anything I had read before.

I am a history student currently working on a significant thesis project on female Russian terrorists. One of the reasons I enjoyed this book so much was because I could make connections to my own work. However, I think Webb's writing is extremely accessible to everyone, not just academics. The language he uses is understandable to anyone regardless of their level of expertise. Furthermore, he writes almost as if he's telling a story, which I found made the monograph flow in a concise, interesting way. Regardless if you've heard of the suffragette bombers or not, for anyone interested in this topic, this book is a great place to start!

Such an interesting and interesting read im so interested in history so this was a dream i loved this!

An interesting insight into the suffragettes. Something not usually written about. Engaging, interesting and noteworthy. A good read to enlighten a read about a movement over one hundred years old.

The Feminist Fatales: Far from peaceful protesters... how Britain's Suffragettes turned to 'TERRORISM' to win vote by blowing up trains and torching tearooms - amid claims their tactics DELAYED women's rights