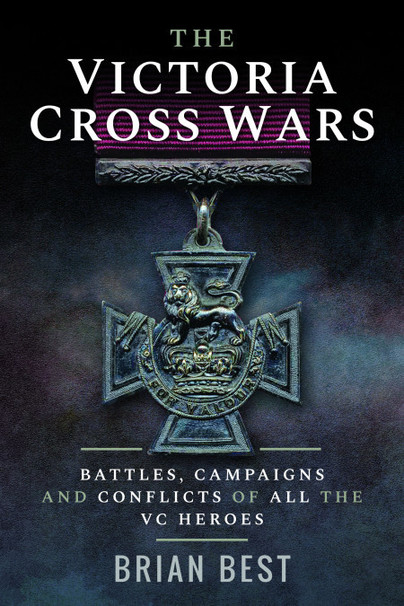 Add to Basket
Add to Wishlist
You'll be £25.00 closer to your next £10.00 credit when you purchase The Victoria Cross Wars. What's this?
+£4.50 UK Delivery or free UK delivery if order is over £35
(click here for international delivery rates)

I thoroughly enjoyed reading the background to each of the conflicts, including some little-known ones such as the War of the Golden Stool. The book is well illustrated with some sixty photographs and I recommend it to anyone interested in military history.

Within each chapter are the stories of one or more Victoria Cross holders. Some of these campaigns and wars are barely known today, but the author has filled each summary with good details and extensive background on the actions the soldiers fought and the award of the decoration.

This is a comprehensive and fixating book, combining together various stories of the Victoria Cross awards throughout the years. It covers various theatres of war, in the context of the British imperial and foreign policy, and the diverse conflicts therein. Many of these countries which were part of the Empire were won, and held with warfare. Fighting, though, means bloodshed; it also means bravery.
To this end, the book explains Britain's involvement in the lesser known campaigns, whilst intertwining the stories of battles and engagements which resulted in the award of the highest distinction of valour for the British Army. In total, 1,358 Victoria Crosses have been awarded since its inception in the mid 1800s. The stories behind the awarding of these medals have been repeated in countless anthologies but The Victoria Cross Wars explains not just what the men did, but why they were there and what they were fighting for.

The list of conflicts encapsulated in the book is comprehensive. The reader learns about various VC's awarded from its inception at Crimea, to the Persian War, Indian Mutiny, Bhutan War, the Second Afghan War, and the Anglo Zulu War; to name but a few. In turn, the reader obtains a valuable insight into the major campaigns in which Britain was engaged in the middle to late 19th Century. Further details are added of the Anglo-Boer War, the First World War, World War Two and the Falklands War. In turn, this book is as much a military history of British campaigns over the last two centuries as much as it is a valuable history of the Victoria Cross. The two are of course inexorably linked. Moreover, the book explains Britain's involvement in these little-known and forgotten campaigns and details the battles and engagements that resulted in the granting of the most highly regarded award for valour in the face of the enemy.

Alongside the copious detailed biographies included in the book, contextualised background is provided in relation to each campaign thus giving the reader an overview of British Imperial conflict, the World Wars, and also post-war engagements. In turn, the greater conflicts of the twentieth century receive due treatment as do more recent operations in the troubled parts of the world.

Each story in this book deserves its own focus and concentration. However, just a few developed in the book continually give us reminder, if it were needed of the heroism, individualism and also spirit of comradeship encapsulated in this award. Just one story is that of James Langley Dalton during the Zulu attack at Rorke's Drift where he supervised the defensive work, and was among those who faced the first attack at the corner of the hospital, where he provided important fire on the attacking Zulu's and also saved the life of a man in the Army Hospital Corps by shooting a Zulu who had seized the man's rifle. Another such example is that of Joseph John Farmer who during the first Anglo-Boer War, was hit many times by bullets during a Boer attack which resulted in many British casualties. It was noted in the London Gazette that Farmer had showed a 'spirit of self abnegation and an example of cool courage which cannot be too highly commended'.

The story of Gunner Alfred Smith during the Sudan War is equally captivating having fought of an attacker with a handspike until the square reformed. Stories of further gallantry in subsequent conflicts are developed, including that of Richard Douglas Sandford, Royal Naval officer, commander of submarine C.3. He obtained his V.C. during the Zeebrugge Raid, 1918, a British attempt to halt German submarine access to the North sea via the canal from Bruges to Ostend. The fearlessness of Ferdinand Maurice Felix West is equally as engrossing; the first V.C. awarded to the newly formed Royal Air Force. Despite being badly wounded, he managed touchdown, whilst also being attacked by German fighters. Equally, Francis Arthur Jefferson, display similar fortitude during the Battle of Monte Cassino when his company dug in under attack. Francis took the initiative going forward, and attacked the leading attacking tank, contributing to stalling the
attack.

Such stories are rightly eternal, and measureless in how they continually resonate. They ensure that the reader takes a back to reflect upon what exactly courage means. The stories shared in this book further helps secures the knowledge that the gallantry and spirit of these men lives on for future generations. As so often said, Ordinary people doing extraordinary things.

Quite an absorbing read

Looking at things from a new angle, the author is to be congratulated on tackling more than 50 campaigns in chronological order, thus creating an important addition to the canon of the Victoria Cross which will be welcomed by all military historians.

A magnificent work. Key documentation on which to deepen and a very useful guide to control the military actions of the British Empire in time and form.

A fine historical and contextual study of this most important decoration.

An interesting insight into some of our VC heroes. The index with names at the back is helpful when looking for specific names.

This is a brilliant book that looks at the Victoria Cross and the people to whom it has been awarded in the various conflicts since its inception.

There have been other books on VC recipients before, but personally I have found this one of the most interesting ways of looking at them that I can remember reading.