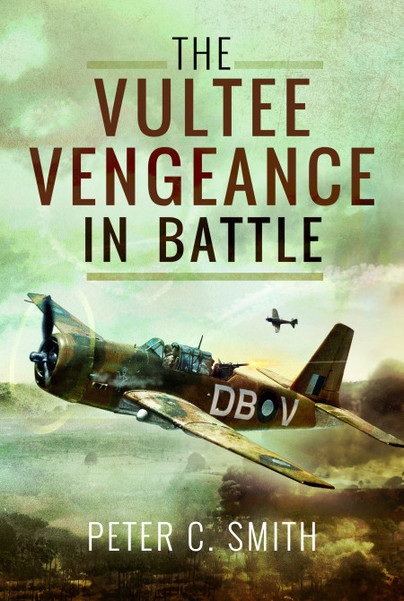 The Vultee Vengeance in Battle (Hardback)

Add to Basket
Add to Wishlist
You'll be £25.00 closer to your next £10.00 credit when you purchase The Vultee Vengeance in Battle. What's this?
+£4.50 UK Delivery or free UK delivery if order is over £40
(click here for international delivery rates)

This book describes the extraordinary combat career of the American-built Vultee Vengeance dive-bomber in both the Royal Air Force and Indian Air Force service during the Burma Campaigns of 1942-45. This single-engine, all-metal aircraft was ordered by the Ministry of Supply during the darkest days of World War II when the lethal German combination of Junkers Ju.87 Stuka and Panzer tank forces had conquered most of Europe in a campaign that lasted a mere few weeks and the invasion of Britain was considered imminent.

The RAF had invented the dive-bomber concept in 1917 but had consistently rejected it in the inter-war period with the obsession of heavy bombing predominating official thinking almost exclusively. By the time the Vengeance arrived a still-reluctant RAF was seeking a precision bomber to prevent a repeat of the Japanese Naval attacks in the Indian Ocean and six squadrons were set up to counter this threat. With the Japanese on the borders of Burma and India, these aircraft, no longer required for the original role, proved by far and away the most accurate bomber aircraft operated by the British up to that time.

The Allied Armies on the ground, including Orde Wingate’s Chindits, clamoured for their continued use and considered them essential, but in vain, and by 1945 all had been replaced. Their achievements have been ignored, falsified or scorned ever since but here, from eyewitness accounts and official records, is their full and true story.

A fascinating look at a largely overlooked aircraft of the second world war. Full of comprehensive data of squadrons including the crews and the aircrafts themselves. Peter Smiths level of research and the dedication it must have taken to write this book is very apparent as you read through it.

... the sheer depth and breadth of research and information in the book means it's a superb history of the type.

The Vultee Vengeance is one of the lesser known aircraft in RAF service during WWII. This dive bomber was acquired from the US by the British Purchasing Commission in the darkest days of the war and played an important role later in the Far East in support of the Chindits special forces – Highly Recommended

Peter Smith has produced a remarkable work about the Vultee Model 72, A-31, A-35 Vengeance dive bomber entitled The Vultee Vengeance In Battle, published by Pen & Sword. In it's 8 chapters of 324 pages, he covers the origins and development of the aircraft from the Armee de l'Air specifications to the ever changing RAF demands. Six specific combat squadrons and their operations are discussed in detail. I hadn't realized how accurate and effective this 0° angle of incidence dive bomber was and how important its service had been. This book brings to light the true value of this unsung aircraft. There is a map of Far East operations and 32 photos along with text that covers its use by the IAF, RAF, RAAF, Free French, USAAF and Brazilian Air Force.

It stands as superb piece of research and a fitting response to the type's detractors.

Fantastically detailed written text... I would urge you to pick this up.