The War in the South Pacific (Paperback)

Add to Basket
Add to Wishlist
You'll be £14.99 closer to your next £10.00 credit when you purchase The War in the South Pacific. What's this?
+£4.50 UK Delivery or free UK delivery if order is over £35
(click here for international delivery rates)

The Japanese invaded the Solomon Islands in May 1942 with the aim of building an airfield at Guadalcanal. After an epic six month struggle they were repulsed and the island became a staging base for US Admiral Halsey and his South PacificForce.

Comprising powerful naval, marine and army assets as well as land and carrier-based aircraft, Halseys Forces mission was to neutralise the Japanese presence in the South Pacific before moving on to Japan itself.

As explained and depicted in this fascinating book, the campaign was eventually successful but only after some of the bitterest fighting of the Second World War. The fanatical opposition called for extreme measures from US, British and Australian land, seas and air forces. With detailed narrative and captions, the many archival photographs in The War in the South Pacific make for a superb record of this legendary conflict.

This is not an easy read with some disturbing photos. However, it is an extraordinary pictorial commentary on a particularly intense and brutal campaign, and for that reason is a valid piece of history.

Jon Diamond has produced a rare collection of photographs of which, in Britain, is the least known battlefield of the Second World War, the Solomon Islands in the South West Pacific. In 1942, Japan struck ‘south’, destroying America’s Navy in Pearl Harbour and British army in Singapore. This opened the door to seize the Dutch East Indies and brought its army to within 500 miles of Darwin in Australia. Britain, fighting a war on three fronts Europe, Middle East and Burma lacked the means to help Australia. Its government appealed to America and on 7th August 1942 America, having ‘rolled with the blow’, sent in the Marine who fought a gruelling six-month battle, which stopped the Japanese advance and began the advance, island by island as they fought their way to Okinawa.
The photographs, windows to the past, bring the reader face to face with the reality of that war.

Each photograph carries a story line taking the reader through a two-dimensional history of the war in the south Pacific. This is not a coffee table book one but a page turner to be read and reread, finding something new on most occasions.

Another new addition to the very popular Images of War series. This book covers the fight back from 1942. The author has provided some very readable text to accompany the fine selection of images. This is one of the larger books in the series and contains more text with extra pages to ensure a first rate collection of images. Much Recommended

Lots of interesting photo references in here, while the text provides an equally interesting background to one of the lesser well known parts of the war in the Pacific. Another good addition to the Images of War series. 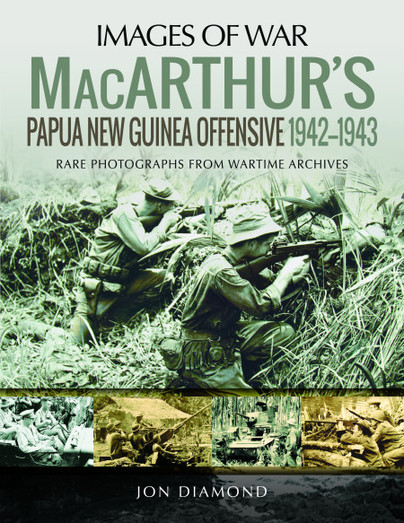 The Japanese seizure of Rabaul on New Britain in January 1942 directly threatened Northern Australia and, as a result, General Douglas MacArthur took command of the Southwest Pacific Area. In July 1942, the Japanese attacked south across the Owen Stanley mountain range. Thanks to the hasty deployment of Australian militiamen and veteran Imperial Force troops the Japanese were halted at Ioribaiwa Ridge just 27 miles from Port Moresby. MacArthur’s priority was to regain Northeast New Guinea and New Britain. The capture of airfields at Buna and re-occupation of Gona and Sanananda Point were pre-requisites.…

Click here to buy both titles for £30.98
More titles by Jon Diamond
Preorder