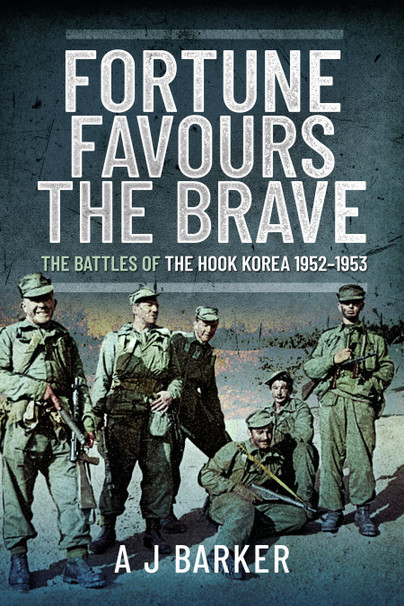 Add to Basket
Add to Wishlist
You'll be £10.39 closer to your next £10.00 credit when you purchase Fortune Favours the Brave. What's this?
+£4.50 UK Delivery or free UK delivery if order is over £35
(click here for international delivery rates)

All too little remembered today, the Korean War was bitterly fought out under atrocious conditions of weather and terrain. Greatly outnumbered by their Communist Chinese and North Korean enemy, the United Nations forces fought with extraordinary resolve and gallantry.
The Hook, the name given to a prominent ridge on the Peninsula, saw more blood spilt than any other feature in this prolonged and grisly war. Not surprisingly it became known as 'the bloody Hood'.
The two costliest battles are described in detail in Fortune Favours The Brave, a classic account of the war. Both involved British infantry battalions of 29 Commonwealth Brigade. In November 1952, The Black Watch saw off a major Chinese attack against all odds. In May 1953 it was the turn of 1st Battalion, The Duke of Wellington's Regiment to face what must have seemed an overwhelming onslaught. Along a 1,000 yard front the greatest concentration of artillery fire since the Great War was brought to bear on Chinese human-wave attacks.
In the morning the Dukes still held the ground despite heavy casualties. This feat of arms, achieved by battalion made up mainly of young National Servicemen from yorkshire, ranks among the finest in the long and glorious history of the British Army.

We stay in the Far East for A.J Barker's Fortune Favours the Brave: The Battles of the Hook Korea, 1952-1953 (Pen & Sword). Most of the books emerging from the Korean War concern the American side of things, some of them conveniently overlooking the other nations that fought there. Barker examines two British regiments that performed extraordinary deeds along a ridge that became known as the 'Bloody Hook': The Black Watch in November 1952, and the Duke of Wellington's regiment in May 1953. Both regiments stood their ground against relentless Chinese human-wave attacks, sustaining heavy casualties in the process. If you can't wargame that, you're not trying: this is classic attack vs defence and is again ideal for solo or cooperative games.

Korean War: The Third Battle of the Hook ends

The third Battle of the Hook was a battle of the Korean War that took place between a United Nations force against a predominantly Chinese force. The Hook saw more blood spilt than any other feature in the Korean War.