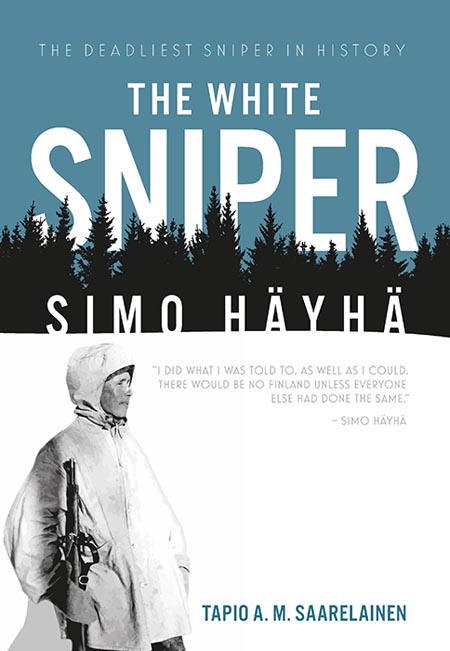 Add to Basket
Add to Wishlist
You'll be £13.97 closer to your next £10.00 credit when you purchase The White Sniper: Simo Häyhä. What's this?
+£4.50 UK Delivery or free UK delivery if order is over £35
(click here for international delivery rates)

Simo Häyhä (1905–2002) is the most famous sniper in the world. During the Winter War fought between Russia and Finland in 1939 – 1940 he had 542 confirmed kills with iron sights, a record that still stands today. He has been a role model for snipers all over the world and paved the way for them by demonstrating their significance on the battlefield.

Simo Häyhä was a man of action who spoke very little, but he was hugely respected by his men and his superiors and given many difficult missions, including taking out specific targets. Able to move silently and swiftly through the landscape, melting into the snowbound surroundings in his white camouflage fatigues, his aim was deadly and his quarry rarely escaped. The Russians learned of his reputation as a marksman and tried several times to kill him by indirect fire. He was promoted from corporal to second lieutenant and he was awarded the Cross of Kollaa. For sniping Simo Häyhä only ever used his own m/28-30 rifle. Eventually his luck ran out and Simo received a serious head wound on March 6, 1940, though he subsequently recovered.

After the war Simo Häyhä lead a quiet, unassuming life in farming and forestry. His roots were deep in the Finnish soil and he loved life in rural Finland. A true patriot, he epitomized the traits of a professional soldier, performing his duty and setting an example of bravery that personified the Finnish spirit when confronted by the Russian onslaught.
The White Sniper fully explores Simo Häyhä’s life, his exploits in the Winter War, the secrets behind his success including character and technique, and also includes a detailed look at his rifle itself.

Tapio Saarelainen is a career officer in the Finnish Army. He has spent two decades training snipers for the Finnish Army and contributed to the Finnish Army’s manual for snipers. In his youth he competed in rifle shooting. The author has spent much time investigating Simo Häyhä’s life and accomplishments and he interviewed Simo dozens of times between 1997 and 2002.

Other titles in Casemate...
Special Offer