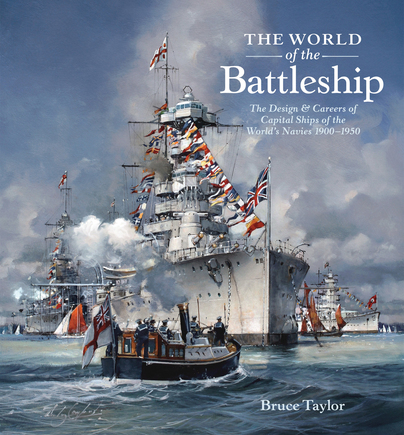 The World of the Battleship (Kindle)

Click here for help on how to download our eBooks
Add to Basket
Add to Wishlist
You'll be £16.00 closer to your next £10.00 credit when you purchase The World of the Battleship. What's this?
Need a currency converter? Check XE.com for live rates

This new volume is intended to present a genuinely global vision of the development of world’s battleships. In a collection of chapters by experts from around the world, the design, building and career of a significant battleship from each of the world’s navies is explored in such a way as to illuminate not just the ships but also the communities of officers and men that served in them and, more broadly, the societies and nations that built them.

While ships from the Royal Navy, the US Navy, the Kriegsmarine, the Imperial Japanese Navy, the Marine Nationale and the Regia Navale are given significant coverage, so are those from the smaller navies, for example, Austria-Hungary, Russia and Turkey.

Each chapter explains the origins of a particular ship, her importance as a national symbol and her place in the fleet. The genesis of her design along with particulars of her protection, armament and propulsion are covered and the construction process and launching described. The ship’s complement and organisation are detailed, and daily routine and watch-keeping explained, and how this varied between peace and war. Life onboard – eating and sleeping for officers and ratings, discipline, pay, morale, pets and mascots – are covered as well as a full account of the ship’s career, so that the distinctive character of each vessel and navy emerges. This is a highly original and significant book on the great capital ships of the world.

This is an excellent book. It is of the highest quality in terms of publication and research. Each author presents a comprehensive bibliography about the national navy discussed, at the end of each section. It is a worthwhile addition to anyone’s library.

"I have no hesitation whatsoever in highly
recommending this superb book to all naval enthusiasts."

With nearly 450 pages this book is highly recommended for any naval enthusiasts’ bookshelf and I will be delving into its pages long into the future to find another superb nugget of information about this amazing period of naval history.

The title of this large size, lavishly produced Seaforth volume on the world’s battleships is slightly misleading. It states on the cover “the design and careers of capital ships of the world’s navies 1880-1990”, which could imply full coverages of all capital ships. In fact it covers, as accurately specified on the title page inside, “The lives and careers of twenty-one capital ships from [...twenty one of…] the world’s navies 1880-1990”. In reality it is a compendium of twenty one battleship stories. As Bruce Taylor states the aim is to provide in-depth coverage of a representative vessel from each navy which had a battleship in commission between 1882 and 1992. In chronological order each chapter tells the story of one ship from one navy, starting with China (the Chen Yuen of 1882) through to the Missouri of the United States of 1944. The book is a clever idea and does it wonderfully well thanks to the skill of the editor in selecting an excellent cross section of ships and navies. Some of the ships are not well known but many, such as the Hood for Great Britain, the Scharnhorst for Germany, the Nagato for Japan, the Littorio for Italy, the ill-fated Viribus Unitis for Austria-Hungary and the ex Goeben for Turkey are iconic ships and well known. They are written by a very good collection of twenty three contributors who cleverly manage to capture the spirit of the respective periods with interesting side articles on incidents, events, political situations, the men and technical details.
It is illustrated throughout with a hugely impressive number of very good black and white photographs, many I had not seen before. This prodigious and intriguing work is most strongly recommended and is a must for all those wishing to indulge themselves in splendid battleship nostalgia.

A significant book on the great capital ships and their role in the expression of a nation’s seapower.

This work is a landmark in naval history and among the most important books to appear in the field of naval warfare for many years.