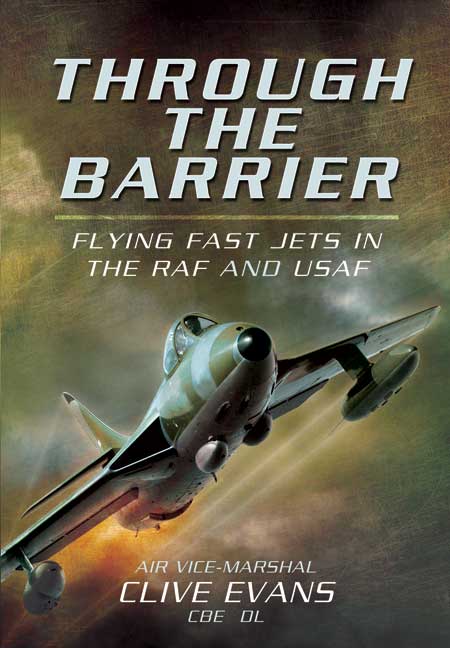 Through the Barrier (Hardback)

Flying Fast Jets in the RAF and USAF

Add to Basket
Add to Wishlist
You'll be £19.99 closer to your next £10.00 credit when you purchase Through the Barrier. What's this?
+£4.50 UK Delivery or free UK delivery if order is over £35
(click here for international delivery rates)

Clive Evans had a lengthy front-line flying career in which he flew Hunters, Canberras and Lightnings. He covers the roles, performance and technical details of each of these types before recounting his own personal experiences on them. The final fast jet he flew was during a three year posting to the USA to evaluate the General Dynamics F-111 that the British Government were considering purchasing. It was at the end of that overseas tour that he was severely injured whilst driving to the airport to return to the U.K.

Lucky to escape with his life, he suffered major spinal damage and was initially partly paralysed: he eventually recovered but his injuries put an end to flying fast jets. Nevertheless, his return to duty involved becoming Project Officer for the design of the new Tornado, followed by a year at Staff College after which he became the Personal Staff Officer to the Air Marshal tasked with procuring new air systems for the Services. He returned to flying by converting to the Hercules, became CO of 24 Squadron, and took part in the Cyprus emergency of 1974.

Clive then became Station Commander at RAF Lyneham which suddenly became the main transport base for supplying our forces during the Falklands War. He drove the Station to unprecedented levels of effort and devised the programme to train the crews to become capable of air-to-air refuelling; a skill that was vital to undertake the long-range flights required in the South Atlantic. The Falkland Islands featured again when, having been promoted to Air Commodore, he was sent there as Deputy Commander of all British Forces.