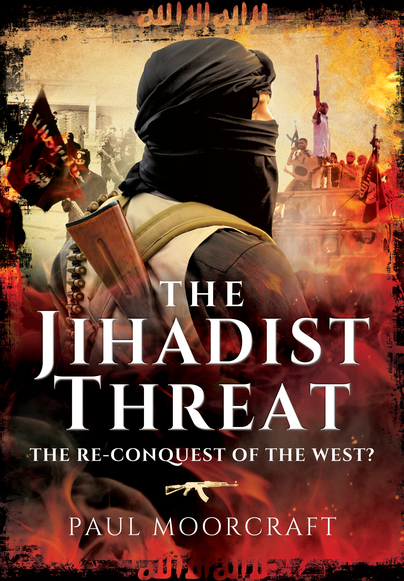 You'll be £19.99 closer to your next £10.00 credit when you purchase The Jihadist Threat. What's this?
+£4.50 UK Delivery or free UK delivery if order is over £35
(click here for international delivery rates)

This timely and controversial book examines the international and domestic threats to the West from Jihadism. It joins the dots in the Middle East, Asia and Africa and explains what it means for the home front, mainly Britain but also continental Europe and the USA. More Brits are trying to join the Islamic State than the reserve forces. Why? It puts the whole complex jigsaw together without pulling any punches.
After briefly tracing the origins of Jihadism from the time of the Prophet, The Jihadist Threat analyses the fall-out from the Iraq and Afghanistan wars and how far these fuelled the rise of the self-styled Islamic State and other terror groups and the extent these pose to European society. Finally, the Author offers suggestions for defeating this existential threat to the Western way of life.
This well-illustrated book is written from the inside. Professor Paul Moorcraft, currently the Director of the Centre for Foreign Policy Analysis, London, has long worked at the heart of the British security establishment and has operated as a war correspondent in over thirty conflict zones since Afghanistan in the 1980s, often alongside frontline Jihadists. Arguably no-one is better qualified to write on this subject and his knowledge coupled with forthright views cannot be ignored.

As referenced in the House of Lords regarding the British Government's policy failure in Libya and the negative impact of the overthrow of Colonel Gadaffi.

This is another incredibly timely and pertinent book by - I have to say - my favourite author on his subject.

Professor Moorcraft's analysis of the Jihadist threat explains both the history and the evolving current situation. His first-hand experiences of the militant Islamic mindset gives a greater understanding of the divisions within the Muslim religion and and the enormity of the threat of Jihadists to both the Middle East and Europe. He explains how the West's unwanted meddling in the Middle East has hardened the terrorists' resolve and increased the threat of even more extreme attacks in Europe. He outlines various ways in which the West can become smarter in tackling this growing physical and ideological threat which will be with us for a long time to come. If,like me, your knowledge of Jihadism is limited to radio, television and newspaper reports I would highly recommend this book to gain a far broader understanding.

If like me you want an easy and no nonsense read on the Jihadist threat and IS, then I recommend this book. There are far too many academic, long and boring reads out there where authors pontificate far too much to page fill, but this isn't one of them as Mr Moorcraft pontificates very little.

If you have to read just one chapter, then read Chapter 8: Elephants in the Room.

I enjoyed reading Paul Moorcraft's summary of the current global and domestic Jihadist threat. It serves as a great overview of the current Islamic – terrorism threat picture at home by looking at the motivation of Jihadi's juxtaposed against the continued idiocy of Western attempts to enforce 'democracy' (an anathema in conservative Salafist Islamism) on nations where the concept is completely alien and perhaps more relevantly, unwanted. The West's meddling has only served to increase the threat of terrorism and 'Jihad' at home. I recommend this book to seasoned Islamism and Jihadi – interest readers and the casual reader also. It serves as an accompaniment to a collection or a good overview of the Islamist terrorist problem the world is facing today.

A well researched and written book. Professor Moorecraft has the ability to succinctly record the current and historical situation in the middle east and the tide of terrorist attacks sweeping the west into a thoroughly readable and understandable format.

With first hand knowledge through his time on the front line of reporting, Moorecraft’s book makes for a highly informative and interesting addition to any library and puts so much of the political rantings (from both sides), and good and bad media reporting that we are bombarded with on an almost daily basis, into clear perspective.

The book’s format bounces between a mostly academic approach to a personal and thought provoking analysis. An excellent read and a fascinating insight into the Jihadist threat facing the world today.

Despite the author's academic pedigree, the language and even his brand of humour make it very accessible. Moorcraft pulls no punches in giving us his view of how to tackle this modern threat to national security.

As featured in the Belfast Telegraph

This is a ‘must read’ book if you are at all interested in the most important political issue of the day. The rise of radical Muslim Jihadism is fomenting the ongoing tragedy in the Middle East, one of whose side effects is the precipitation of the European migrant crisis.

The author places the current situation into its proper historical context with many perspicacious observations and insights along the way. He does not stop there, however, and provides many interesting analyses and speculates on a number of possible future scenarios. Most importantly, he sounds a wake up call to the West to recognise the very real potential danger it is facing. However, this is no extremist rant but a series of logically argued and well-made points. Responsibility and criticism is levied fairly and liberally across the board, as the author seems to be striving to achieve as honest a perspective as possible rather than peddle some particular partisan agenda.

A word on the style. Although largely academic in nature, it is very readable, as another element to the writing is redolent of a male bar room conversation, replete with earthy language and cheap jokes to boot. Some might find this distasteful, but I personally find it made for an interesting, and at times amusing, read.

An excellent analysis of the challenge from political, social and military perspectives. Paul Moorcraft has first hand experience to ground him due to his career path and work in the field. The book is also bang up to date, or as far as one can be in a fast moving scene (it will have changed again for sure in 6 months). This is a very important contribution to the current debate for thinkers and those of power and influence, both in the West and beyond. The style is direct and deliberately 'non academic' with practical suggestions and even some humour, which is not misplaced and relieves the study of a very tough subject. A must read.