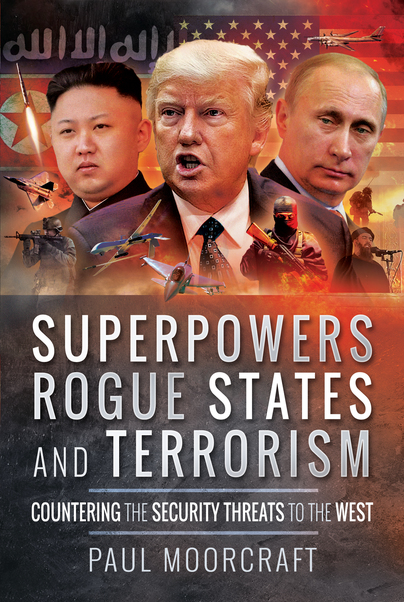 Countering the Security Threats to the West

You'll be £19.99 closer to your next £10.00 credit when you purchase Superpowers, Rogue States and Terrorism. What's this?
+£4.50 UK Delivery or free UK delivery if order is over £35
(click here for international delivery rates)

Dr Paul Moorcraft’s recent controversial and prophetic book on Islamic terrorism – The Jihadist Threat: Reconquest of the West? – raised a storm and many questions. Here he answers them. The author is unusual in having spent time with frontline jihadists in Afghanistan, the Balkans and North Africa. So this is no moral tract based on theory but instead draws on hard frontline combat. Jihadism has become a long-term threat to the West. Then along came Brexit and Donald Trump to add to the complications of rogue Russian behaviour.
Superpowers, Rogue States and Terrorism is unique in analysing today’s crises and opportunities in the context of a matrix of threats ranging from Russia, China, through jihadism to North Korea. The possible solutions to these challenges that the author offers are highly provocative, including re-introducing internment for UK jihadists to the dismemberment of the two prime Western enemies, namely Saudi Arabia and Pakistan. He also examines possible deals with Russia and China, not least in solving the blatant nuclear sabre-rattling by North Korea.
Professor Moorcraft’s expert insights are based upon extensive knowledge and first-hand eye-witness experience. But beware: he doesn’t pull punches nor are his views in any way politically correct.

In these uncertain times Paul Moorcraft's latest book is first class, and well worth reading. Don't expect a dry-as-dust academic tome; Moorcraft manages to combine the relaxed communications skills of a well-travelled and experienced journalist with the deep knowledge of an expert in the field of strategic studies. He writes wittily and engagingly and with a geopolitical awareness that is almost tactile. His coverage of the forces at play in Middle East politics is compelling, as is his balanced and mature assessment of the 'threat to the west'. Unlike most other analysts he also sensed the possibility of some sort of an agreement with the US over (or perhaps even with?) North Korea. Highly recommended.

A stimulating and thought provoking read, well written and clearly drawing on the authors experience in a wide variety of fields.

A highly readable weave of scrupulous reporting and academic research, with slashes of forewarned political incorrectness stitched in, “Superpowers, Rogue States and Terrorism” is an unconventional, at times bemusing, and above all, thought-provoking assessment of the pressing political and security issues of today’s fraught world.

If this reviewer was asked to recommend one book as a basic resource for the 2017 international geopolitical scene, Superpowers, Rogue States and Terrorism: Countering the Security Threats to the West would be it. According to the author, the volume ‘…Traces the growth of the Islamic threat and offers some domestic and international solutions by working with potential allies in Europe and the Middle East’. He concludes ‘My conclusion is positive – many of the current problems can be solved’. The result is well-written, well-researched, eminently readable and objective. It is the ideal ‘go-to’ volume for anyone with an interest in international affairs.