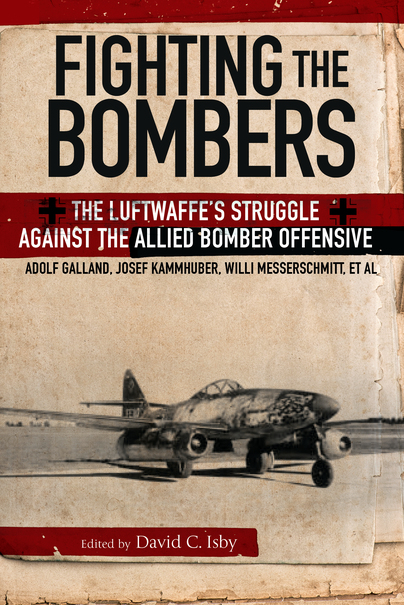 Add to Basket
Add to Wishlist
You'll be £12.99 closer to your next £10.00 credit when you purchase Fighting the Bombers. What's this?
+£4.50 UK Delivery or free UK delivery if order is over £35
(click here for international delivery rates)

"Fighting the Bombers" is an unrivaled look at the Allied bombing campaign from the point of view of the Luftwaffe establishment and command. The contributing authors were involved in all aspects of German attempts to stem the unrelenting bombardment from the RAF and USAAF -- from tactics in the sky and development of the planes themselves, to long-term strategy and planning on the ground, and the implementation of sophisticated radio and radar equipment. It provides a detailed insight into German aviation strategy and includes the writing of such notables as Messerschmitt, Galland, and von Rohden.

A wealth of statistical information and diagrams lifts this collection of interviews almost into the “Textbook” category. I recommend this book to all of you who are seriously interested in German WW2 (night) fighter operations and looking for hard, factual data combined with operational experiences.

Not a reference, this book provides an in-depth examination of the Luftwaffe’s effort to turn back the devastating attacks by Allied bombers. The sources are interviews, interrogations, and reports from German pilots, commanders, and aircraft developers. The text is necessarily dry. But if you are interested in the Allied bombing offensive and the German response, this book will be of interest.

This book is particularly valuable because it is based on the accounts of the Luftwaffe’s leading fighter pilots and senior officers, in their own words and sensitively edited into a single volume. These are the flyers who knew the German perception of the great air war over Germany and Occupied Europe in the greatest detail and strongest authority. As a perception, it also says much by what else is known but omitted from their accounts.