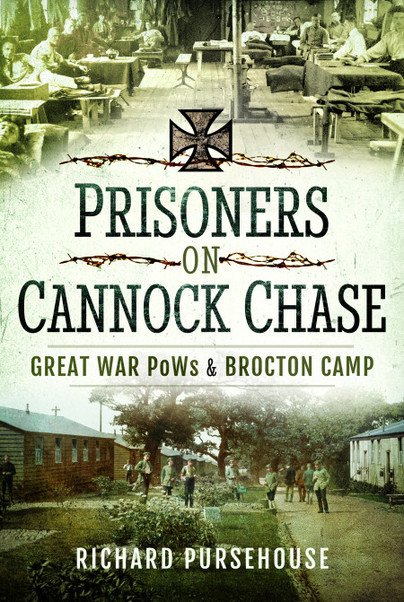 Add to Basket
Add to Wishlist
You'll be £19.99 closer to your next £10.00 credit when you purchase Prisoners on Cannock Chase. What's this?
+£4.50 UK Delivery or free UK delivery if order is over £35
(click here for international delivery rates)

In researching and writing “Prisoners on Cannock Chase”, Richard Pursehouse has done a terrific job.

An excellent read, based on thorough research, that tells about the POW camps themselves but also about social history of the time. I know the Chase well and have also read much over the years about WW 1 but still found a great amount of new material. The end notes are superb and essential to read as you go. I used a tablet which makes slipping around easy. Anyone interested in the first war will enjoy this book.

Article: ‘Captive community that left its mark on the Chase’ as featured by

This is more than local history (although it will be of great interest to people from the area – I certainly intend to go and find the site once we are all allowed out again!), as it covers an important but often sidelined aspect of the First World War.

A well researched and written book, with great attention to detail and plenty of humour. You get the feeling that the author loves his subject and has dug deep for facts and anecdotes.
Bought it for my dad who loved it, and now I'm getting stuck into it too.
Well recommended.

What a fascinating read on a subject I knew little about and I suspect that most people have little knowledge about too. I suspect these days when people think of prisoner of war camps they think of WW2 and camps British soldiers had to endure. But this book looks at everyday life for the prisoners such as exercise, work parties, food, security and much more. The book is also very impressive not just in its writing and research but also the maps at the beginning of the various camps is very clear and well done. Along with all the pictures in the whole book that range from the prison camp inmates, to staff, to the location and also propaganda, posters and documents related to the site.

At the end of the book is a very comprehensive Endnotes section to read which is excellent and not very often seen. This is a very impressive book, very well written and researched and I can honestly say it was a joy to read. An excellent 5 stars.

’Story of German PoWs on Chase’

Richard Pursehouse has uncovered so much more about this area and turned it into a fascinating book worthy of your attention. As a first world war POW camp, it saw various scandals, intrigues and escapes. It's Richard's painstaking research and diligence in uncovering the stories that are showcased so brilliantly in his amazing book.