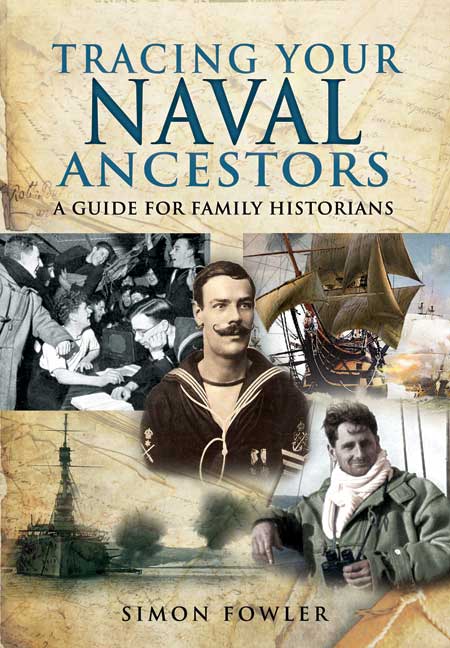 Click here for help on how to download our eBooks
Add to Basket
Add to Wishlist
You'll be £4.99 closer to your next £10.00 credit when you purchase Tracing Your Naval Ancestors. What's this?
Need a currency converter? Check XE.com for live rates

This concise guide to naval history and naval records is essential reading and reference for anyone researching the fascinating story of Britain's Navy and the men and women who served in it. Whether you are interested in the career of an individual seaman, finding out about a medal winner or just want to know more about a particular ship, campaign or operation, this book will point you in the right direction.

Simon Fowler assumes the reader has little prior knowledge of the Navy and its history. His book shows you how to trace an officer, petty officer or rating from the seventeenth century up to the 1960s using records at the National Archives and elsewhere.

The book also covers the specialist and auxiliary services associated with the Navy – among them the Royal Marines, the Fleet Air Arm, the naval dockyards, the WRNS and the Fleet Auxiliary. In each section he explains which records survive, where they can be found and how they can be used for research. He also recommends resources available online as well as books and memoirs.

His handbook is a valuable research tool for anyone who is keen to find out about the career of an ancestor who served in the Royal Navy or was connected with it. Simon Fowler is a leading authority on military and family history and a prolific writer on these subjects. He once edited the National Archives' family history magazine Ancestors. For nearly 20 years he was an archivist at the Public Record Office (now The National Archives). As well as publishing many articles in magazines and journals, he has written several well-known books on military and family history, including: Tracing Your Army Ancestors, A Guide to Military History on the Internet and Tracing Your Ancestors. He is also a professional researcher – find out more at www.history-man.co.uk.

As featured in 'useful sources' part of Nelson's Navy feature

This softback gives guidance on tracing Naval Ancestors from the 1600s to the 1960s using records at the National Archives and elsewhere. It covers Officers, Petty Officers and Ratings. Apart from the Royal Navy it also includes details of the Royal marines, Fleet Air Arm, WRNS, the Coastguard and the various auxiliary forces and Naval Dockyards. In each section of the book the author explains which records survive and where to locate them.

Prolific genealogy writer Simon Fowler here turns his expert eye to exploring naval history and tracing naval records. It forms a comprehensive guide to researching men and women in the naval forces as well as specific ships and campaigns. It’s packed with a wealth of information, with resources on naval slang.

Another in the “Tracing Your…” series, this time tacking a topic of naval ancestors, whose records are completely different from those of men in the Army or Air Force. Fortunately the Navy was just a bureaucratic as the younger Services and Simon says, “if one set of documents is missing then there may well be a duplicate which will do almost as well.”
An excellent guide to researching your sailor ancestors.

This is a concise and practical guide to anyone researching Britain’s naval force from the seventeenth century up until the 1960s and who is keep to research the career of an ancestor who served in the Royal Navy or was connected with it. With information on how to trace an officer, petty officer, or rating this book also covers the specialist and auxiliary services including the Royal marines, the Fleet Air Arm, the naval dockyards and the WRNS.
Each section explains where records can be found and how they can be used for research and recommends the sources available on line as well as books and memoirs.

This book will be of especial help to those who had an ancestor in the Royal Navy or were connected with it. Fowler provides information about how to trace an officer, petty officer or rating, and he covers the associated specialist and auxiliary services including the Royal Marines, the Fleet Air Arm, the naval dockyards, the WRNS and the Fleet Auxiliary. This book will point you in the direction of individual seamen, finding out about a medal winner, particular ships, campaigns or naval operations.

Anyone who has tried to research an ancestor in the Royal Navy will be aware of the myriad of confusing records to search. Simon Fowler, once an archivist at The national Archives, has brought these together and given them a sense of order in this useful book… If you have Naval Ancestors this is a helpful addition to your bookshelf.

If you have an ancestors who served in either Royal Navy or its affiliated services then this book is likely to be of exceptional use to you… This volume provides an excellent guide for researching ancestors who served in the Royal Navy and its’ affiliated forces, The structure of the book is such that it introduces the reader to the subject and then it helps the reader to enhance their research. As such it provides considerable ‘value added’ to the progress of the research. This work is not just aimed at those researchers with minimal experience. Those with considerable experience will still find this book to be of exceptional value. In short, if you are contemplating conducting research into the Royal Navy and its affiliates then this book is a must have for your personal library.