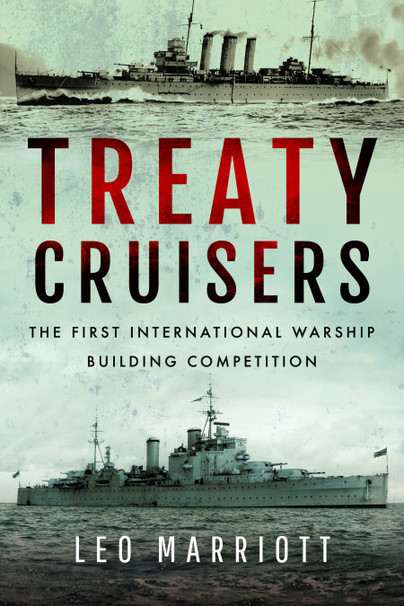 Add to Basket
You'll be £9.09 closer to your next £10.00 credit when you purchase Treaty Cruisers. What's this?
+£4.50 UK Delivery or free UK delivery if order is over £30
(click here for international delivery rates)

The Washington Naval Treaty of 1921 and subsequent treaties in the 1930s effectively established the size and composition of the various navies in World War II. In particular they laid down design parameters and tonnage limitations for each class of warship including battleships, aircraft carriers, cruisers and destroyers. With one or two exceptions, battleship construction was deferred until the mid 1930s but virtually all navies embraced the concept of the 8in gun-armed 10,000 ton heavy cruiser and laid down new vessels almost immediately. This book traces the political processes which led to the treaties, describes the heavy cruisers designed and built to the same rules by each nation and then considers how the various classes fared in World War II and assesses which were the most successful.

Overall this book is a worthy attempt to cover a huge subject in a handy-to-read summary.

Overall Treaty Cruisers is a good analysis and worth the read.

The author has crafted a book that is both a technical read and popular history. The book provides an excellent overview of the reasoning each country employed in building its interwar cruiser force and how they committed these ships to battle. If development of and employment of weapon systems is of interest to you, this is a must-read book.

This 2019 version continues to be a must read for both naval historians and warship modellers alike.

This is a quite enlightening book that discusses the most important group of heavy cruisers serving during WW2 and how the type evolved. The work is quite thorough and easy to read which should please nearly all readers.

Marriot’s style is easy to read and he provides a good survey of the Treaty Cruisers, covering the treaties, the building programmes and the performance in combat. This is a book I am happy to have on my bookshelf.

This book is a good read. After a short introduction covering the genesis of the cruiser, there is a reasonably detailed description of the political and technical background that influenced the major powers to limit warship construction, and how this resulted in the Washington treaty which standardised cruisers to the 8in gun and 10,000 tons. The RN was the first to build a significant number of ships to the treaty and by 1930 had commissioned 13, evolving from the initial Kent class through two further sub classes. The other major powers also invested strongly to this standard.

The meat of the book describes how each country built to meet their particular requirements. The modifications made pre-war and under the pressure of war are covered clearly and in considerable depth. The life and death of each ship is covered in summary. The book concludes with the author's view of the comparative success of each design. This is naturally difficult because of the length of time involved, and the different situation each country was facing. For instance the British ships were early designs and lacked the armour and anti-aircraft protection of later ships. Whereas the Japanese designs were considerably overweight and fighting overwhelming American air power in the Pacific.

Overall it is a good source of information and a recommended read. 185 pages and many useful illustrations.