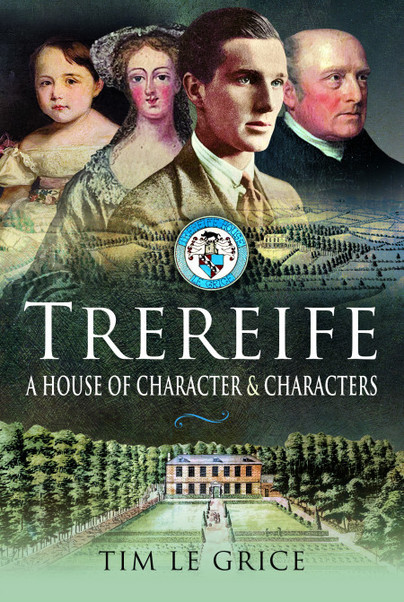 A House of Character and Characters

Add to Basket
Add to Wishlist
You'll be £20.00 closer to your next £10.00 credit when you purchase Trereife. What's this?
+£4.50 UK Delivery or free UK delivery if order is over £35
(click here for international delivery rates)

Trereife, Tim Le Grice’s historical Cornish residence, described by Pevsner as ‘one of the most charming houses in Cornwall’ has been home to a diverse range of characters over six generations of the author’s ancestors.

Brought together within this book are fascinating forbears on both sides of the family. Charles Valentine le Grice, educated at Christ’s Hospital with his great friends Samuel Taylor Coleridge and Charles Lamb; Herbert Ward who served with the explorer Stanley in darkest Africa before becoming a sculptor of some renown and who was the dear friend of Irish Nationalist Roger Casement until Casement was convicted with treason; and Andrew Downes, youngest lieutenant commander in the Royal Navy before the First World War, represent just a few of the many characters who made Trereife their home.

This book with a Cornish core charts the life of these and other personalities of Trereife from the late seventeenth century to the present day; residents, visitors, guests are all brought to life through the sharing of a vast array of family stories, letters and other personal archives, memoirs and material.

Triumphs and tragedies abound, and the work to preserve Trereife for future generations continues.

This is essentially the biography of a house and the generations of the Nicholls and Le Grice family that wandered through it.

Beginning with ambitious 17th century barrister, John Nicholls, who transformed Trereife into a proper manor house, and concluding with the author.

The author allows you to major of events of modern British history through the experiences of his ancestors.

The most fascinating character in the book, as far as I’m concerned, is Val Le Grice. A failed writer turned tutor, who arrived at Trereife at 23 with the task of teaching the disabled heir to the manor, the unfortunate 8-year-old William Nicholls.

In short course, the Lord of the Manor died. Val married his widow (he was 24, she was 35). Their own son was born. And soon after the disabled heir was encouraged to sign over his entire inheritance to his half-brother. There’s much more to the story, but I’ll leave that for readers to discover on their own.

The story of the Nicholls/Le Grice inheritance is really the stuff of gothic novels.

I have really enjoyed reading about this house and it’s history. A delightful insight into both the problems incurred by the upkeep, and the heartbreak which the families found themselves involved in. Very well written.

Author Tim Le Grice was born in 1942, not at Trereife but in London during the ‘Blitz’ – a word that perhaps describes much of his subsequent life at ‘Trereife’ in an ever-changing world. A life of variety, undeniably, and one which encompassed a number of attempts at being a jockey whilst training to become a solicitor, a profession he settled into and practised for many years.

Attempting to look after Trereife is now the centre point of his life, including the opening of the house and gardens. A rather different life to that of his forebears.