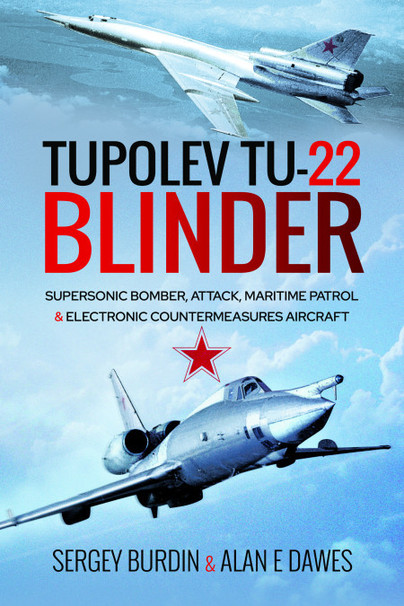 Add to Basket
Add to Wishlist
You'll be £16.99 closer to your next £10.00 credit when you purchase Tupolev Tu-22 Blinder. What's this?
+£4.50 UK Delivery or free UK delivery if order is over £35
(click here for international delivery rates)

This historic Russian aircraft was first delivered to the Soviet Air Force at the height of the Cold War in 1961. It remained in service until replaced by the much modified Tu-22M Backfire which was introduced in the early 1970s and still remains in service. It was the first Soviet supersonic bomber and was used for reconnaissance and bombing, in the latter role carrying either conventional or nuclear bombs. The early aircraft had a range of 1,800 miles but later models had a much increased radius of action through the introduction of in-flight refuelling. This book looks at the design and development of the aircraft up to the introduction of the type M Backfire. Details of construction, weapon systems, photo-reconnaissance and jamming equipment are included to cover the several variant models. Operational use is explained and the text includes many first-hand accounts from Russian aircrew of the period. The book will be superbly illustrated by unique official photographs and manuals.

This offering from Pen and Sword is a fascinating subject made all the better with the chapter on incidents and write-offs involving long-range Air Force Tu22’s between 1960 and 1989. An excellent read from start to finish, especially recommended to Russian aircraft enthusiasts and modelers alike.

A detailed examination of the plane and its multitude of variants filled with technical discussion that techy aviation enthusiasts will love.

I would highly recommend this book to those interested in the Tu-22 itself or Soviet aviation during the Cold War in general.

The book stands out for its superlative writing. That it is a joy to read also in English is thanks to co-author Alan Dawes, a Brit who wrote for Air Forces Monthly and AIR International Magazines and had already translated two other Russian aviation books and written several of his own.

Sergey Burdin's previous military experience in the Russian Air Force gives him the edge in that he has 'first-hand' experience of the aircraft and its operation. Additionally, Burdin has recently compiled a comprehensive record of accidents and crashes involving the Tu-22 during its service life. This includes full descriptions of the circumstances and causes of the accidents, with blame apportioned to the 'guilty party/parties' in each case. This is quite unusual for Russian military aircraft accidents.

Alan Dawes is a main contributor to the international aviation press and his Russian linguistic skills have enabled him to bring to light a great deal of recently published Soviet aviation history. He is a major contributor to Air Forces Monthly.