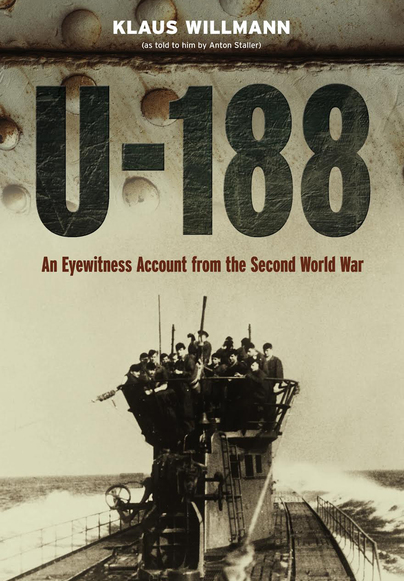 Anton Staller was a U-boat lookout, rising no higher than Leading Seaman and his account of the war from the lower ranks is unique. He served on the Type IXc/40 boat, U-188 under Kapitänleutnant Lüdden on three patrols witnessing the stark reality of convoy warfare from his lookout position on the conning tower of his submarine. His U-boat sank the British destroyer HMS Beverley and eight merchant ships exceeding 100,000 gross tons but the submarine also spent many hours submerged under depth-charge attacks.

More so than many of his contemporaries, Staller was prepared to reveal his thoughts and feelings of his experiences of the war at sea, and of his time on the conning tower, at the hydrophons, and cleaning weapons as a messboy.

His journal demonstrates how political thinking rarely entered the minds of the
U-boat men, even though many of them, such as Lüdden, did not choose to serve in submarines. Staller was not a Nazi and came from a Socialist Party background, yet he never questioned the cause he was fighting for. To Staller it was simply 'Us or Them to the death'.

NOT quite 75 per cent of all German submariners serving in World War II, some 28,000 men, lost their lives. In addition, another 5000, or 12.5 per cent, became prisoners of war. In human terms it is hard to imagine how one could continue to fight in severe conditions where the likelihood of death was constant. Of course there is no option of an individual running away from the front lines or surrendering when they are on a naval vessel at sea. The only way for a modern reader to try and understand how a German submariner lived in the extraordinary circumstances of WWII and how average human beings are able to overcome great obstacles is through the recorded memory of a survivor.

U-188: A German Submariner’s Account presents the memoir of Anton (Toni) Staller as told to the book’s author Klaus Willmann. Born in a small village near Munich in Bavaria the 18 year old Toni volunteered for the submarine service in the Kriegsmarine to avoid being just another conscripted German solder. From 28 September 1941 until the end of the war in April 1945, Toni trained for, served in and fought in the U-boats. His was a remarkable and lucky career. After basic submarine training he joined the crew of U-188 ,which was working-up in the Baltic, as a seaman lookout on the submarine’s ‘winter garden’.

In early 1943 U-188 was deployed on its first cruise in the North Atlantic. Under constant threat the boat managed to survive its episode in the Battle of the Atlantic although it was a close run thing. If the boat had sortied only a few months later its chances of survival in the Atlantic would have been greatly reduced. They reached Lorient in occupied France and following extensive repairs U-188 was sent to the Indian Ocean, to the Japanese occupied port of Penang in Malaya. A chart showing the cruise of the U-188 from France to Penang and back, between June 1943 and June 1944, is included within this book.

It was fortunate that the U-188’s War Diary was captured by the Royal Navy from one of the submarine’s boats and subsequently an intelligence report prepared on the subject. This source complements the memories of our informant Toni Staller. Once again back in France Toni describes how the Kriegsmarine organisation effectively collapsed and how the Navy crews made their way back to their bases in Northern Germany. Here their limited land warfare training kicked in and helped with their chances of survival.

For the next ten months Toni Staller was a submariner without a boat however the collapse of the German frontiers in early 1945 meant he was attached to an elderly recommissioned training boat in order to conduct a suicide mission in the North Sea. He was fortunate that circumstances, and perhaps action by a number of the crew, meant that this planned mission never took place. Following the surrender he was a prisoner of the British until released but even then the numerous difficulties of post-war Germany were always a concern.

Anton Staller led a remarkable and unusual life. He was a regular man who was also a brave and well-trained submariner. He was also a Nazi, although the extent of his support with the worst actions of the Nazi regime will probably never be known. He was most likely a submariner first and a Nazi second. His memoirs offer an interesting view of what it was like to serve as a sailor in the Kriegsmarine’s submarine force.

One might hope that such experiences of high intensity naval war are a thing of the past, however I would suggest only the technology has changed and in future wars sailors and submariners will need a willingness to continue to fight at sea no matter the risks involved and in necessity to lay down their life in defence of their family, friends and way of life. If so, it is an open question whether modern generations will volunteer to serve or not bother.

Memoirs from surviving German submariners are rare, and those from ordinary rankers even scarcer. Consequently, this book provides an unusual view of life in the U-boat service.
His Memoir is easy to read, well translated and will surely find a place on the shelves of every U-boat enthusiast.

This is a delightful and spirited account of life in U-boats and it contains a several memorable moments. Written in a highly readable manner, this is a most enjoyable book.