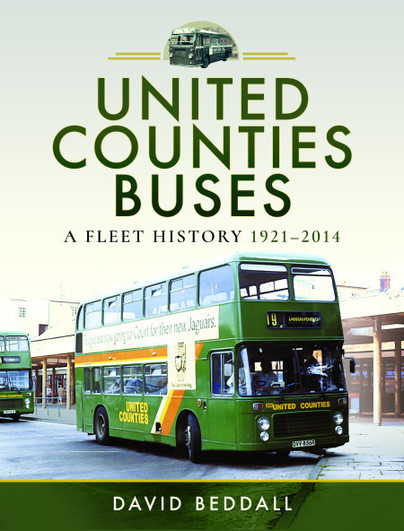 Add to Basket
Add to Wishlist
You'll be £21.00 closer to your next £10.00 credit when you purchase United Counties Buses. What's this?
+£4.50 UK Delivery or free UK delivery if order is over £35
(click here for international delivery rates)

An interesting book at an organizational level and with a large selection of images.

Following a similar format to previous bus books reviewed in these pages, David looks at the history of the long standing bus company from its origins in 1921 to 2014 when the brand ceased to be. The book covers the origins and the various changes to the fleet of the company over the many years featured and is accompanied with a number of good quality photos. Members modelling the period from the 1950s to the post privatisation era might well find something of interest here, though it will appeal more to a historian or bus enthusiast.

This book is sure to find a place on the shelves of those with a love for this long-lived company.

Listed in the paper's Down Your Way feature

David Beddall is a life-long bus enthusiast, who from the age of seven has pursued his interest in the subject. He initially took an interest in his local bus services in the Bedford area, but later expanded his interests to Northamptonshire and later still the whole of the country. London’s Dart and Dart SLF is his latest book for Pen and Sword, in this volume he has researched the history of this iconic single-decker. David Beddall lives with his family in Northamptonshire, where he continues to pursue his bus interests.