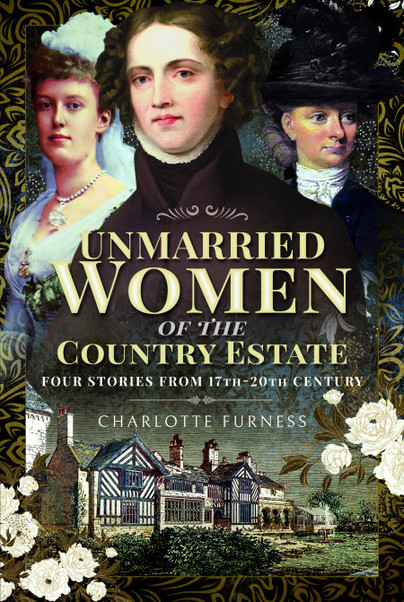 Add to Basket
Add to Wishlist
You'll be £19.99 closer to your next £10.00 credit when you purchase Unmarried Women of the Country Estate. What's this?
+£4.50 UK Delivery or free UK delivery if order is over £35
(click here for international delivery rates)

As the fight for women’s rights continues, and whilst men and women alike push for gender equality around the globe, this book aims to introduce readers to four women who, in their own way, challenged and defied the societal expectations of the time in which they lived.

Some chose to be writers, some were successful business women, some chose to nurture and protect, some travelled the globe, some were philanthropists. Each one made the conscious decision not to marry a man.

Elizabeth Isham of Lamport Hall, Ann Robinson of Saltram, Anne Lister of Shibden Hall and Rosalie Chichester of Arlington Court. These are elite women, all connected to country houses or from noble families throughout the UK, and this book explores to what extent privilege gave them the opportunity to choose the life they wanted, thus guiding the reader to challenge their own beliefs about elite women throughout history.

This book is unique in that it brings the stories of real historical women to light – some of which have never been written about before, whilst also offering an introduction to the history of marriage and societal expectations of women.

Starting in 1609 and travelling chronologically up to 1949, with a chapter for each woman, this book tells their remarkable stories, revealing how strong, resilient and powerful women have always been.


It was such an interesting book, full of facts from the lives of those women, a book with extensive research. I will definitely recommend it.

I enjoyed learning about these four women, their lives, and their historical period, and I’d love to learn more about them. I recommend this book to people interested in women’s history, social history, also those interested in UK country properties, and, in general, readers of history looking for a different approach.

Listed in the magazine’s Bookshelf feature

Fascinating look at these unmarried women I was totally absorbed going back in time to enter their lives. Each woman's life had an interesting story to tell. If you love history a woman’s place in society I highly recommend this book.

Charlotte presents the personal histories of four women from the 17th, 18th, 19th and 20th centuries in some detail and in the context of examining their effects on the matter of gender equality. Fascinating.

This book looks at the lives of four women from 1608 to 1949, the four women are Elizabeth Isham, Anne Robinson, Anne Lister and Rosalie Chichester. The main reason around this book is that none of them got married, a good reason but slightly surprising when historically it always seems women were either directed to marry someone or they were co-ersed into marriage. These women were women of standing too, from noble families or country houses. In this book each chapter is dedicated to each woman and looks at how strong they were and how they lived their lives and how they weren’t timid, little women characters at all.

From reading this book I can honestly say I learnt quite a bit more than I expected, I would say that we learn more of our knowledge about history from what we see on television. But this book was very informative, clear and quite enlightening. The women in this book didn’t marry for bad or poor reasons, they didn’t marry for important and heartfelt reasons, which I should really say as to ruin the book for others. But these are all strong women who had other important reasons to follow instead. A really good book and the people were chosen well, it wasn’t the stereotypical book that it could have been. In fact another book of other women would be good, or maybe choose women that did marry for various reasons. An enjoyable book which felt like an important but valued read. Well done to the author Charlotte Furness.

Unmarried Women of the Country Estate by Charlotte Furness is a really different kind of book I have ever read. It was different as in it concentrates on four different womens lives . The time period is different as in the different years as you will see how things had changed over the years with each women. The time period covers from the 17th -20th centuries so saying that you can and will see the changes,not only in the world but what women believed or didn't believe, what they were allowed and not allowed to do...and what each of these four women themselves, what their views were and are and not! Have to say it was really interesting emotional and spiritual. The characters of these women you will see through this writer's amazing writing. Grab some tissues as I did and see what all their reasons are and were for all that they did in and with their lives and why! I don't think I have read this authors work before but I will look her up because I think this is a very well written and exciting and emotional story of each of these well known women that I had never heard of before but I do now so yes,I learned from this book and thankful for the century that I as a woman live in now!!

This was a very interesting and emotional and thought provoking book about women's history. Very much recommended!!

Books which focus on fascinating and enterprising women in the past lure me in. The author researched four women, spanning 1608 to 1949, different eras with the common thread of remaining single in times when it was highly unusual. All four wrote candidly about their lives and those around them in splendid detail. Thankfully the author researched these compelling women so in depth! I was drawn to each of the four stories and could clearly envision them.

The first woman, Elizabeth Isham, chose God over marriage and chronicles her relationship with God beautifully. Ann Robinson chose to nanny her brother-in-law's children after her beloved sister died. Anne Lister was a business woman and was involved in the mining industry and politics. She chose a woman. Rosalie Chichester loved animals and nature and taught botany. She traveled extensively.

Be sure to read the author's notes where she discusses shedding light on lesser-known women in history. She also includes issues which affected these woman...and are still relevant today, including depression and lesbianism.

All four women deserve further research. I wish to learn more! This makes me curious about the thousands of stories we have yet to learn about others in history. Such a breath of fresh air!

This is a great introductory book about prominent unmarried historical women, and how they defied convention. Of the four, I only knew a bit about Anne Lister beforehand, and she’s probably the best known of the four. I like that it is well researched, and takes into account the wider context of the times, such as the privileges class afforded them.

This was a good look at four women who, each for their own reasons, remained unmarried despite society (and occasionally family) pressure to conform and marry. Elizabeth Isham (1604-1654), Anne Robinson (1742-1828), Anne Lister (1791-1840), and Rosalie Chichester (1865-1949) were each members of the nobility or gentry and each generally had the means to support themselves in their chosen state. Author Charlotte Furness agrees that this is only a small look at how and why women might remain unmarried during these times, and that certainly women with less financial security would have to make other choices. But these looks into both the lives of the women through letters and diary entries, and the social and religious time period they lived in, give readers interesting insights. Furness supplies excellent bibliographies for readers interested in learning more about any of the women, claiming from the beginning that her book is more an introduction to the women, their society, and the search to understand the unmarried women of the time than the be-all, end-all book on the subject. I thought she did an excellent job covering a lot of ground in a few pages, and will be certain to follow up this book with some of her suggested books from the bibliographies.

Given what I know about health care in the centuries prior to WW2, I really don't blame women for remaining single if they had the option! These women did have the option and chose different paths. Good for them! Too many women didn't have options and life could be difficult and cruel. It's an interesting book. I had always assumed those women remained single for other reasons, primarily the shortage of suitable men. But also little dowry, maybe sexual orientation, taking vows in a church order, etc... The book only covers 4 women from 1608-1949. Short and interesting read.

There are no words to describe books that define a certain topic in different centuries and this book delivered.

I found each woman to be unique, either with their personalities or stories.

This is a very well presented book!

This a good introduction to the history of marriage in the 17th, 18th, 19th and early 20th centuries. It is a short book that works well at introducing the topics at play when you consider the lives and impact of Elizabeth Isham, Anne Robinson, Anne Lister and Rosalie Chichester, all incredibly interesting and important women. Furness doesn't shy away from the influence of class on the women's' experiences and does a good job of summarising the lives of the four women. This book is perfect for someone new to the historical period and subject.

I really enjoyed reading about these four very interesting women! The only one I knew of previously was Anne Lister, but I was fascinated to read about Elizabeth Isham, Anne Robinson, and Rosalie Chichester as well. The text was engaging and informative, and I had no difficulties following along. I also enjoyed the supplementary information given not just about their lives, but the lives of women in general for their respective eras.

This is fascinating. A study of four women with different lives but some things in common, including the repressive treatment of women by society. Obviously well researched, this book bridged the gap between academia and a simply entertaining read. The four case studies are distinct but taken together give a social history of the time.

Charlotte Furness was born and raised in Huddersfield West Yorkshire.

After completing a BA in English, and an MA in Country House Studies at the University of Leicester, she started a career in heritage, working for English Heritage, Lamport Hall, Harewood House, Temple Newsam House, Renishaw Hall and more.

She now works as a full-time writer and heritage historian, exploring women’s history and the history of the country house.