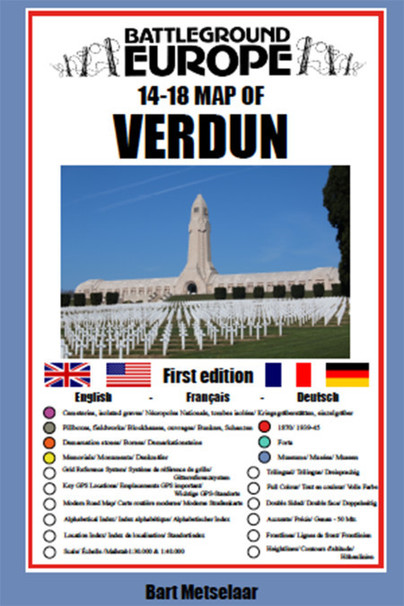 Add to Basket
Add to Wishlist
You'll be £4.99 closer to your next £10.00 credit when you purchase Verdun. What's this?
+£4.50 UK Delivery or free UK delivery if order is over £35
(click here for international delivery rates)

For many years the Holts have provided tourers to the battlefields with excellent mapping for the Ypres Salient and the Somme. This map of the Verdun/Meuse area fills one of the many gaps in the coverage of the Western Front.

This map of the Verdun battlefield is in the same style, using a colour coded system to distinguish the different types of features. It includes some 300 locations of memorials, cemeteries, significant remnants of the battle terrain, remaining fortifications, trenches, the destroyed villages and other vestiges of the war. On the reverse there is a cut out and enlarged section of the Verdun battlefield in particular - the most visited part of the area, which provides greater detail. This section includes the Ossuary at Douamont, Forts Douamont, Vaux and Souville and many more features.

GPS references are given for the more signifiant sites. Roads and major tracks are shown, with restrictions in access as known at the date of publication.

The map extends from the eastern fringes of the Argonne Forest to the west and encompasses the whole of the 1916 Verdun battlefield to the east. This means that several places of interest to the student of the American army's offensive in late 1918 are shown.

The map is tri-lingual - in English, French and German - so far as is practicable given the constraints of space. The map is of a manageable size, both in a vehicle and when being used outside.

An amateur cartographer, he has produced the mapping for a number of Pen and Sword Battleground Europe books. He has been working on this Verdun map for some years, painstakingly searching out memorials that have been all but forgotten. He is now turning his attention to the Arras battlefield. 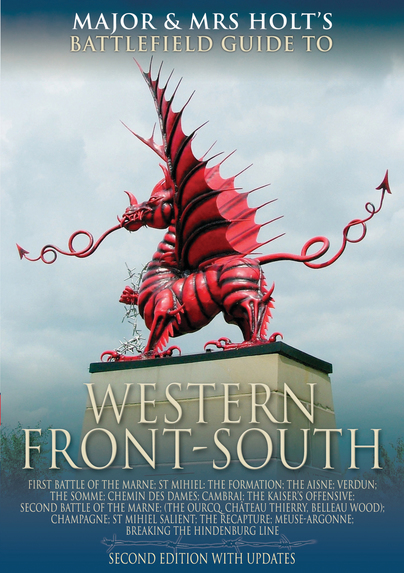 MAJOR & MRS HOLT'S Concise, Illustrated BATTLEFIELD GUIDE TO THE WESTERN FRONT- SOUTH contains many fascinating but little-visited areas by travellers and is hoped that they will tempted further afield than the 'showcase' and sophisticatedly presented battlefields like the Somme to discover some marvellous sites. Many of them have lain virtually 'dormant' for many years (such as areas of the Meuse-Argonne and Champagne) but have recently been renovated and opened up by dedicated local enthusiasts. There are many 'gems' in store in this book. Each battlefield starts with some pertinent quotations…