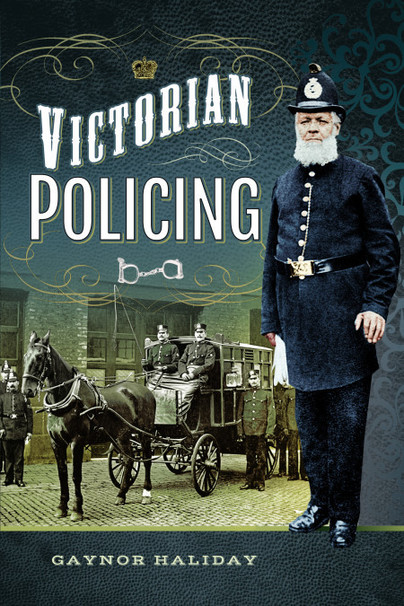 You'll be £12.99 closer to your next £10.00 credit when you purchase Victorian Policing. What's this?
+£4.50 UK Delivery or free UK delivery if order is over £35
(click here for international delivery rates)

What was life like for the Victorian bobby? Gaynor Haliday became fascinated with the history of the early police forces when researching the life of her great, great grandfather; a well-regarded, long-suffering Victorian police constable in Bradford. Although a citation claimed his style of policing was merely to cuff the offender round the ear and send him home, press reports of the time painted a much grimmer picture of life on the beat in the Victorian streets.

Handwritten Watch Committee minutes, historical newspapers and police records combine to reveal an account of how and why the various police forces were set up; the recruitment, training and expectations of the men, the issues and crimes they had to deal with, and the hostility they encountered from the people whose peace they were trying to keep.

A great book that is well written and easy to follow. Gaynor Haliday uses really appropriate anecdotes to explain situations and context which helps to illustrate the story of how policing in England developed through the nineteenth century. There is an immense amount of research underpinning the book but because it is so well written this is not just an academic essay, instead it is very informative and entertaining.
Well worth reading.

"This is a well-researched and readable book and makes the subject very accessible."

I always wanted to be a policeman when I was an early teen, but sadly it never happened due to circumstances beyond my control. This will surely become required reading for new recruits? Gaynor’s superb history of the evolution of the police force during the reign of Queen Victoria is powerful, thrilling and entertaining stuff! A beautiful book all round!

Got this as reference for a project, which means that I intended to dip this book as I needed. The book was so well written however, that I found it a cover to cover read that I kept picking up every spare moment I had. If you want to know how the Victorians went about policing, this is certainly the book for you.

Thoroughly enjoyed reading a book about policing that didn't focus on London and with the added interest of the author's ancestor having once patrolled the streets she writes about. Lots of fascinating facts about Victorian policing from recruitment, how to get promoted, public order policing, street patrol and how to deal with crime and criminals. Well worth reading if you have a police ancestor, particularly one from outside London.

Gaynor’s research is methodical and often in great detail. There are moments of humour when the author quotes from a citation written when her ancestor, PC Bottomley claimed he had whispered to a drunk man in the street,’ If tha’ don’t go home to thi’ wife and bairns a s’al ‘av to run thee in.’...

A policeman’s lot could be often brutal and dangerous in Victorian Britain and I was left wondering how this might compare with modern policing.

This book is thorough in its coverage. I would definitely recommend it to those interested in the period or writers of historical fiction.

The author does a good job of keeping the reader’s attention with her sensitive and intelligent writing.

Brilliant book, well written, interesting from cover to cover. If you have an interest in British policing this is a must read.

There’s a good selection of photographs, my favourite being of a police sports day: six coppers racing for the finishing wire, all in uniform and helmets. I don’t know why, but I found that photo very cheering; an enlargement hanging on my office wall to bring a smile on even the gloomiest of grey, rainy, workaday mornings.

This book offers really detailed, specific chapters that tell not just about policing, but the safety and (sometimes) the corruption of officers themselves. Policing beginning with sentry watchmen as early as 1285, while the true defense of home and property coming from private citizens and the own arms/weapons. It wouldn't be until 1833 that there would be a police force funded by taxes & tolls (in order to offer them salaries, pensions, uniforms, whistles, nightsticks, etc.) to take on incidents involving assault, theft, and poaching. The port towns of the UK are among the first to organize police services with private detectives recruited and on the streets in 1847. I was most amused to find out about the codes maintained for each police force (i.e. no swearing or threatening your police inspector, no being drunk on the beat, and how to thwart someone who is resisting arrest).

There is a wealth of information and case studies here, and anyone with policeman ancestors will find it useful. Gaynor covers areas such as recruitment, training and progression up the ranks, to how order was kept, looking at evidence of offences such as riotous or disorderly behavior and how such behavior was treated by constables on the beat. However, evidence of misbehavior by the constables themselves is also explored.

Using Watch Committee minutes, newspaper archives and police records, Gaynor successfully creates an enjoyable narrative - one that has lots of information in it, but also has a light touch (like many of the pickpockets who worked in Victorian Britain, perhaps!)

Read it for: A well-illustrated account of what Victorian policemen did, and the laws and regulations affecting them.

Gaynor Haliday's great great grandfather Thomas Bottomley served in the Bradford Police for 39 years. He never rose above the rank of constable, but had a long police career and was only once reprimanded. It was his life that led her to produce this lively and enthusiastic book.

Haliday is very good in her discussion of the working life of the Victorian police constable...

...if you want rattling good stories about Victorian policemen, look no further...

This is the kind of book that turns my key!

Modern history with a personal flavour. Not the history of monarchy, politics and empire, but the gritty and sometimes grimy history of the police force. How it came about, its development and what it was like to be a constable in the formative years.

Ms Haliday has written a book which is thoroughly readable; it maintains the reader’s interest throughout and whilst being factual, drawing on references and records, it is not an academic volume. Nor should it be as this would inevitably reduce its readability to that of a dry reference book rather than a review of a particular element of social history.

If ‘Victorian Policing’ tempts the reader into academic research, then that is the time to open the dry tomes that lie, dusty and rarely opened, at the back of library shelves.

Pursuing her passion for delving into family and social history, Gaynor Haliday started sharing the stories she had uncovered, by writing magazine articles about her ancestors. Her first book, Victorian Policing (Pen & Sword, November 2017), was inspired by her great, great grandfather’s policing career.

As well as writing website content on a wide variety of topics for a number of clients, Gaynor also has an enjoyable career proofreading and editing for a well-known publisher of social history.