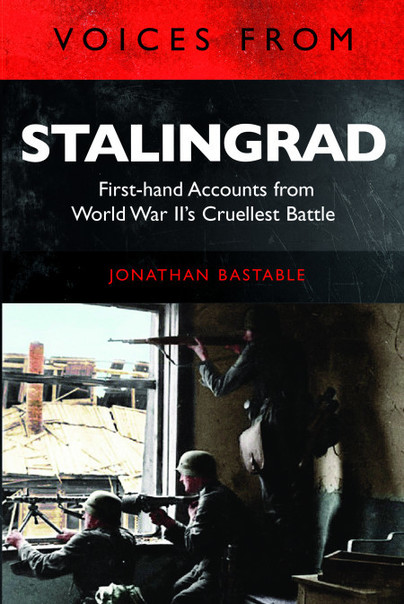 Add to Basket
Add to Wishlist
You'll be £14.99 closer to your next £10.00 credit when you purchase Voices from Stalingrad. What's this?
+£4.50 UK Delivery or free UK delivery if order is over £40
(click here for international delivery rates)

Order within the next 10 hours to get your order processed the next working day!

No previous work about Stalingrad places such emphasis on the experience of ordinary fighters and civilians. This volume of human history and military strategy includes fresh translations from original sources describing this pivotal event of World War II as told by the German and Soviet soldiers who fought the battle, Russian civilians who watched the enemy at the gates as well as Western diplomat and newspaper correspondent onlookers.

Offering a record of one of the pivotal events of World War II, as told through the personal accounts of the German and Soviet soldiers who fought in it, this book features photographs from the Battle of Stalingrad, from both sides of the front.

This is a fascinating record of the pivotal event of World War II, told through the personal accounts of the German and Soviet soldiers who fought it, the Russian civilians who watched the destruction of their city, and Western onlookers such as diplomats and newspaper correspondents. Many of these voices are gleaned from newly-discovered archive material, and from rare sources and reminiscences in Germany and Russia, including KGB sources. Many have never been published, or are totally unknown in the English-speaking world. All foreign voices are quoted in fresh and engaging new translations from the original sources. There are rare photographs of the battle, from both sides of the front.

The author has cleverly taken a chronological account of the battle and woven in numerous personal accounts from over 100 sources, both German and Soviet. Some of the material, taken from German and KGB archives, is published for the first time in this work.

This is a first-rate and absorbing read that establishes a template for ruthlessness in war.

I highly recommend this book. It is one of the best books I've read on WWII first-hand accounts and on the battle of Stalingrad.

It is hard to imagine the terror and the horror of the Battle of Stalingrad except through the eyes of the people who lived through it. Rare photographs and unbelievable testimonies make this an unmissable record of one of the most important and pivotal battles of WW2.

The narrative of the book is coherent and does not lose sight of the "big picture" while focusing on the men who suffered, fought and died in that city. But the protagonists remain precisely the men, men like Yakov Pavlov, famous for the defense of the house that bears his name and whose story is present in the book. A book that cannot be missed on the shelves of any military history buff.

This is a must read for any WWII military history enthusiast.

I found this book very informative, and I like how it incorporates the words of those who took part and not just hear say. It gives a real sense of what happened right down to the fact that everything was rationed at the time (even sleep), and the horror of what was happening - not just the soldiers but to the civilians who were caught up in the fighting. This would be a great inclusion for anyone interested in military history.

Sometimes the genre of historical narrative that inserts considerable ‘eyewitness accounts’ can be clumsy and see extracts inserted with minor effect. This book avoids that trap magnificently and succeeds in using the eyewitness accounts to sharpen the narrative and to add considerable value to the storyline. The maps are excellent and the photographs are well chosen.

Rightly focusing on the battle for the city, this book does not go into too much discussion of the strategic and tactical details of the German plan to exploit the Southern Front, but gives sufficient background to pin the battle for Stalingrad in its correct context. An excellent and compelling read.