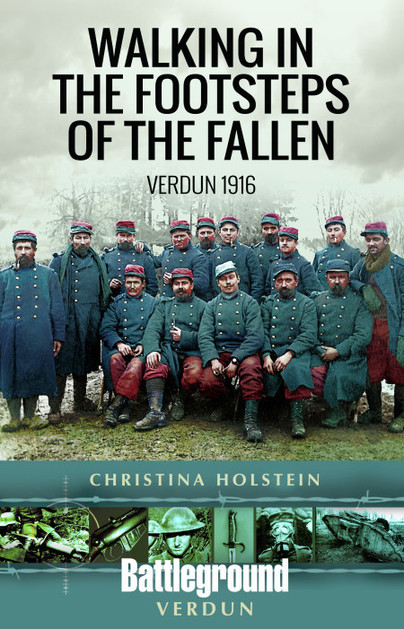 Walking In the Footsteps of the Fallen (Paperback)

Add to Basket
Add to Wishlist
You'll be £14.99 closer to your next £10.00 credit when you purchase Walking In the Footsteps of the Fallen. What's this?
+£4.50 UK Delivery or free UK delivery if order is over £35
(click here for international delivery rates)

A visit to the battlefield of Verdun is usually dominated by the forts of Douamont and Vaux, the museum at Fleury and the striking, huge Ossuary, Although this gives a flavour of the horrific fighting that took place in the area, particularly in 1916, the visitor will be hard pressed to get much more than an impression from such places.This book seeks to guide the battlefield pilgrim into parts of the battlefield that get rarely visited by means of a series of walks, a number of which include the major sites.

The four tours have been carefully walked. All are practicable for a reasonably healthy adult; the tours vary in length, most taking a half day to complete and the longest (the last) a day.

In a twist to the usual walks to be found in the Battleground series, Christina makes full use of the numerous field graves and isolated memorials that are to be found on the Verdun battlefield, a number of which will bring visitors to the most visited sites. In the course of these walks many physical remnants will be found, such as gun positions, bunkers and trench systems, the significance of which is fully explained. The walks have not been chosen at random: by following these the tourer will get a far greater understanding of why the fighting at Verdun developed as it did and why such places as Fort Vaux were so significant to both sides.

The field graves and memorials to the combatants, very often of individuals, provide an opportunity to give their story and the unit action in which they were fighting when they were killed.

Verdun is a battlefield where the story of units and individuals can easily become lost in the horror of the incessant fighting that raged over ten months; and over ground which is extremely difficult to read because of the post war forestation programme. Profusely illustrated and with excellent mapping, a hallmark of Christina Holstein's books, a visitor who follows the walks in this book will be left with a far clearer idea of the men who fought and died here and of the features of the battlefield and their significance in this battle that so challenged the endurance of the armies of two nations.


This is a very useful book for those looking to go beyond the traditional tour and one that will enhance the understanding of all who follow its four routes.

A practical and very interesting work.

With Walking in the Footsteps of the Fallen Holstein manages to humanise a battle where the sheer numbers and ferocity often make it hard to comprehend on a smaller scale. Verdun has been on my ‘to visit’ list for some time, and reading this book simply reinforces that wish. If and when I do make it, this is one book I will certainly be using.

This book is a must for those who are thinking of, or those who have already been on a battleground tour. An easy to carry guide book with handy advice and tips. A very useful and informative tool for anyone who wants the experience of a battlefield tour with an added extra dimension. I particularly liked the way the booked introduced you to some of the soldiers who took part in the battle, and were lost but whose remains were not found until 95 years later. For the reader who has not gone on a tour, this book may well encourage you to pack a suitcase and head for a World War One battlefield. For those already going on one of these tours this adds a whole new dimension to the tour.

The battle of Verdun through this guide lives again through these small monuments and the information provided on the people remembered only makes it an essential book for those who want to know the small stories of the battle, as well as understand how it happened.

As well as the background to the battle, this brings life to the story of the battlefield that was Verdun, a focus for the French and German armies during WW1, scene of huge casualty lists and vicious fighting... This book will certainly go with me next time we are in the area.

An excellent book from an expert author offering insights into areas of Verdun away from the track beaten by coach tours. Ideal for ‘small group’ walking tours and people who want to gain a more detailed perspective of the ground and the events. Recommended.