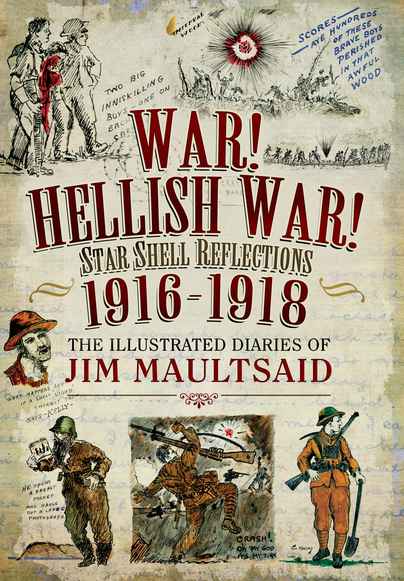 The Illustrated Diaries of Jim Maultsaid

Although an American citizen Jim was living in Donegal in 1914 and first joined the Young Citizens Volunteers and then the British Army.

On 1 July 1916 the first day of the Somme, Sergeant Maultsaid was seriously wounded. To quote from his diary as he lay in no-mans-land ‘The most awful cries rent the night air…it was a shambles…it was ‘Hell’ with the lid off… it was’.

Unlike so many, Jim survived and was hospitalised in ‘Blighty’. After a spell in Northern Ireland, he was selected for officer training at Cambridge. He was commissioned into The Chinese Labour Corps and his words and art work throw fascinating light on this little known but invaluable organization. Jim’s admiration for the CLC’s contribution and culture is obvious.

War! Hellish War! is more than a Great War diary – it is a masterpiece and a collector’s item of great historical and educational value. Despite the countless records of this conflict there is nothing to compare it with.


Taken as a whole, this work provides a panoramic perspective on the experience of civilian soldiers, with a journalist’s skill in weaving together an accessible account of what purports to be one man’s evidently exciting and moving experiences.

A worthwhile, interesting and enjoyable read.

'One hundred years on, following a labour of love by grand-daughter Barbara McClune who typed up and edited the original hand-written bound journals, Jim Maultsaid's account of the First World War offers a genuine, and often humorous, insight into the thoughts of an ordinary soldier.'