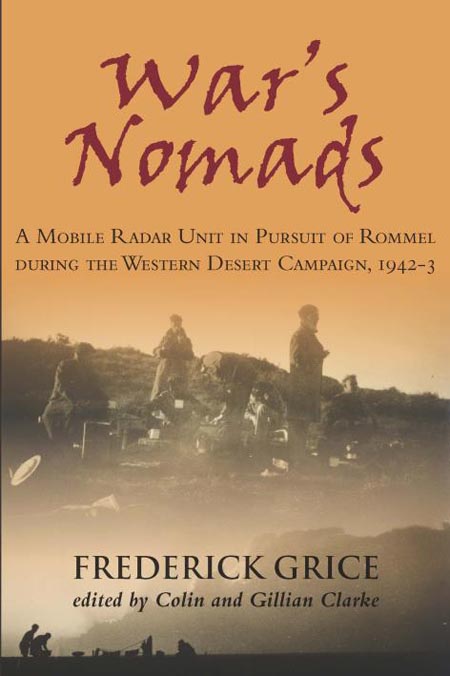 A Mobile Radar Unit in Pursuit of Rommel during the Western Desert Campaign, 1942-3

Add to Basket
Add to Wishlist
You'll be £13.99 closer to your next £10.00 credit when you purchase War's Nomads. What's this?
+£4.50 UK Delivery or free UK delivery if order is over £35
(click here for international delivery rates)

Order within the next 8 hours, 57 minutes to get your order processed the next working day!

War’s Nomads is an evocative account of one man’s experience of life in a mobile radar unit after the battle of El Alamein as Rommel’s AfrikaKorps was relentlessly pursued across the desert through Egypt, Libya and Tunisia by the Eighth Army. It is the only known detailed account in existence of the small radar units who played a key part in the Western Desert Campaign.

A budding professional writer and grammar school master, Fred Grice had a keen eye for detail and ear for language, which he assiduously employed after he was called up in 1941, keeping two journals of his experiences. The first,‘On Draft’ deals with waiting to embark after initial training, with the journey to the battle zone, and the privations of a low-ranking AC. Daily life on board ship is vividly brought to life with details of routine, the cramped conditions, the banter and pastimes used to pass the time by the troops, and the by contrast luxurious existence of the officers. The second, ‘Erk in the Desert’ gives a detailed account of the activities of Unit 606, a radar crew that follows just behind the battlefront. 606 provides radio-detection for the advanced landing grounds being used by RAF fighter-bomber squadrons, because these landing strips, in turn, are the target of the German Luftwaffe and the Italian Air Force attacks. 606 was a tiny unit, never more than 10 men, often operating for protracted periods in complete isolation. Fred’s account vividly and lyrically evokes the landscape and the often tense and dangerous environment they operated in, pitching the reader into the experience of travelling with the unit in a 3-ton lorry, finding ingenious solutions to lack of rations and living space, even commandeering an abandoned boat to relax in the sea, whilst constantly needing to be alert to dodge air attacks.

An authoritative introduction explains the background to the military events of the Western Desert campaign, and the purpose of 606’s mission, which Fred for security reasons cannot talk about: to get to a selection of the 200 or so landing grounds in the desert with all speed; and then to defend them against air attack by using a light warning set (radar) developed to go operational within an hour.

War’s Nomads sheds light on a key but little known aspect of the Eighth Army’s Western Desert Campaign, the first in British military history in which the RAF and the army collaborated so closely. But much more than that it is a human story by a gifted writer that recreates a lost time and landscapes.

Frederick (Fred) Grice was an English graduate and grammar-school master, who, by the time he was called up in 1941, had already collected folk stories relating to the North of England. These stories would later be published in 1944 as Tales of the North Country. He went on to write children’s books that were published by Oxford University Press in the 1960s and 70s.

Gillian, a retired teacher and magistrate, and Colin Clarke, a retired Professor of Geography at Oxford University, are the daughter and son-in-law of Frederick (Fred) Grice; they discovered they discovered the existence of the two handwritten journals and a typed memoir after Fred’s death in 1983.

Gillian, a retired teacher and magistrate, and Colin Clarke, a retired Professor of Geography at Oxford University, are the daughter and son-in-law of Frederick (Fred) Grice; they discovered they discovered the existence of the two handwritten journals and a typed memoir after Fred’s death in 1983.