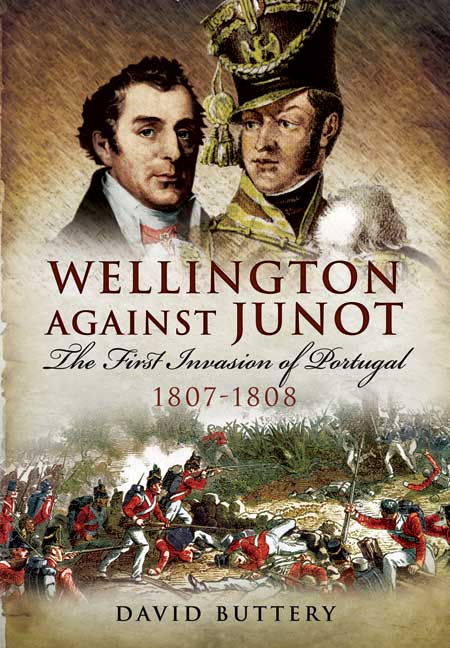 Add to Basket
Add to Wishlist
You'll be £19.99 closer to your next £10.00 credit when you purchase Wellington Against Junot. What's this?
+£4.50 UK Delivery or free UK delivery if order is over £35
(click here for international delivery rates)

The first French invasion of Portugal in 1807 - which was commanded by Junot, one of Napoleon's most experienced generals - was a key event in the long, brutal Peninsular War, and it was the first campaign fought in the Peninsular by Sir Arthur Wellesley, later Duke of Wellington, yet it tends to be overshadowed by more famous episodes in the six-year conflict that followed. David Buttery, in this original and perceptive new study, sets the record straight - his tightly focused narrative covers the entire campaign in vivid detail.

I'll say it from the start ... this book is a magnificent study of the French invasion of Portugal in 1807.

The two protagonists are - on the British side - General Sir Arthur Wellesley and - on the French - Jean-Andoche Junot.

The former a careful, brilliant commander while the latter was a complex beau sabreur with as many faults as good points.

In Wellington Against Junot, military historian David Buttery has superbly painted the opposing commanders, giving a lot of attention to their careers, their armies and he details what led to Napoleon Bonaparte's decision to attack Portugal.

Wellington Against Junot, Buttery also has a very handy section on Touring the Peninsula where he suggests sights of interests and memorials in Portugal to visit.

This is a must-have for anyone interested in the Peninsular War.

The book' descriptions of the important battles of Vimiero and Rolica are detailed enough to please military historians, but lively enough to interest lay readers too.

They are enhanced by excellent maps and diagrams.

Nowadays the Napoleonic wars are often remembered in the afterglow of Wellington's final victory at Waterloo. But it is important to remember that British invasions of Napoleon's Europe were more often failures than successes. Only when led by the indefatigable Arthur Wellesey was Victory assured, and no one knew this when he took command of the 1808 expedition to Portugal.

The book explores the battles in some detail, and is well illustrated by photographs and maps.

The sour after-note is that political blundering at home committed Britain to an over-generous treaty, which allowed the French to withdraw with all their equipment, and on British ships, so undermining Wellington. But he was to return for greater glory later from 1809-1814.