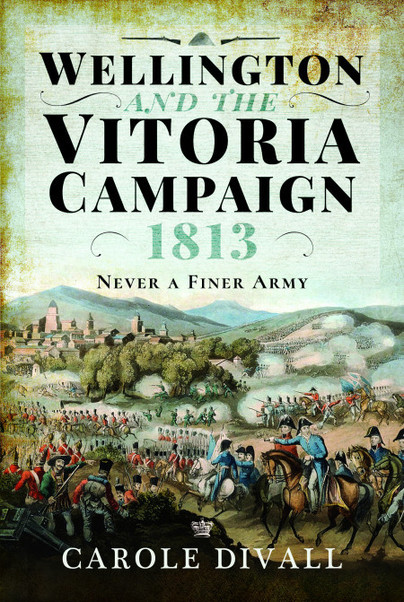 Wellington and the Vitoria Campaign 1813 (Hardback)

Add to Basket
Add to Wishlist
You'll be £20.00 closer to your next £10.00 credit when you purchase Wellington and the Vitoria Campaign 1813. What's this?
+£4.50 UK Delivery or free UK delivery if order is over £35
(click here for international delivery rates)

"This is a book that should form part of any Peninsular library."

I liked the constant return to diaries and letter of those serving in the campaign: contemporary opinions illuminate a history. Detailed but clear and a very readable 236 pages.

Carole Divall is to be congratulated on a very fine volume giving the reader direct insight into the reality of combat during the Napoleonic Wars. This work is a worthy addition to the library of those with an interest in the Napoleonic wars and the Peninsula campaign in particular.

Well done, Carole Divall, for writing an excellent account of this - by many - long-forgotten battle; a battle that put paid to Napoleon's interests in Iberia and was a useful 'warm-up' for the Battle of Waterloo two years later.

The book has everything that those of us without a specialist knowledge of this era crave: a well written narrative, useful appendices, notes, a bibliography and a comprehensive index. This will be an essential addition to the Pensinsular war library.

The value of this book is in the description of the whole campaign while the battle description gives a real flavour of a Peninsular battlefield. We recommend this very good read to a wide audience.

"A worthy book that deserves to be bought."

Friends of the Waterloo Committee Ass

This is an excellent narrative history of the campaign and battle drawing on many personal accounts to deliver a story that gathers momentum and insight. It I supported by good maps although as ever having google earth to hand will make the geography clearer. The appendices showing the detailed order of battle and losses to battalion level are most helpful as indeed is Wellington’s Vitoria Despatch which as an example of brevity nonetheless gives a very useful overview of the battle that I recommend be read first.