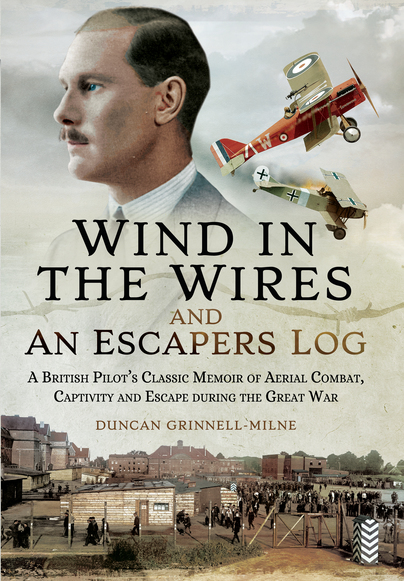 Wind in the Wires and An Escaper’s Log (Hardback)

A British Pilot’s Classic Memoir of Aerial Combat, Captivity and Escape during the Great War

Add to Basket
Add to Wishlist
You'll be £12.50 closer to your next £10.00 credit when you purchase Wind in the Wires and An Escaper’s Log. What's this?
+£4.50 UK Delivery or free UK delivery if order is over £35
(click here for international delivery rates)

Duncan Grinnell-Milne was one of that select band of young men who made history in the air between 1915 and 1918 when they learned to fly in machines that resembled box-kites and laid the foundations of aerial combat which future generations would follow. He became a flying ace, with six confirmed aerial victories, and he spent two years as a prisoner of war before escaping from German captivity to fly and fight again. He took part in the great aerial offensive of 1918 which contributed to the winning of the war. His story of the war in the air is one of the most exciting accounts by a pilot of the Royal Flying Corps – it is also one of the best written and, ninety years after it was first published, it is a classic of its kind.

'We have no hesitation in ranking it with the very best of the war books.' Daily Telegraph

'Wind in the Wires is a war book in class by itself…. From beginning to end the book a lure to read…outstanding.' Flight

'An addition to the number of books about flying needs more excuse than the mere subject of air fighting. This book is excused by the charm of the author's style, by his judgement in pruning his story, and by the interest which his own personality arouses.' Manchester Guardian

'The most beautiful air book that has yet appeared.' Birmingham Post

'The most interesting and attractive quality of the book is the fact that it gives a graphic account of the fledgling days of wartime flying. When the time comes for the great writer of the future to compose a comprehensive narrative of the war, this is one of the books that will help him acquire a true perspective.' Nottingham Guardian

This is a great book for all who enjoy a bit of ‘daring do’ based on fact rather than fiction. Highly recommended.

This is a welcome reprint that is among the best of first-hand accounts of WW1 aviation.

It is well written, engaging and brings to life for the reader the air war as few other books manage to do. If you are planning on treating yourself to one first-class book this year to mark the 100th anniversary then this would be an excellent choice.

As featured on A Wargamers Needful Things.

Excellent book accurately depicting life with the Royal Flying Corps during WW1. Well written, factual, absorbing,entertaining and dispensing with some more of the more gungho accounts of the time.A must read for fans of this genre

Captain Duncan Grinnell-Milne MC, DFC & Bar (1896-1973) was born in London and educated at Cheam School and the University of Freiburg where he became fluent in German. He was commissioned into the infantry in 1914 but later transferred to the Royal Flying Corps. After the First World War he served with the Royal Air Force in the Middle East and as a test-pilot at Farnborough before being appointed an air attaché in Paris. When he retired from the air force in 1926 he worked as an art dealer in New York, as an author and as a broadcaster for the BBC. In 1939 he was recalled by the RAF and served through 1940 and 1941, including a period as General de Gaulle’s liaison officer, before rejoining the BBC. In later life he settled in London and became a professional writer.