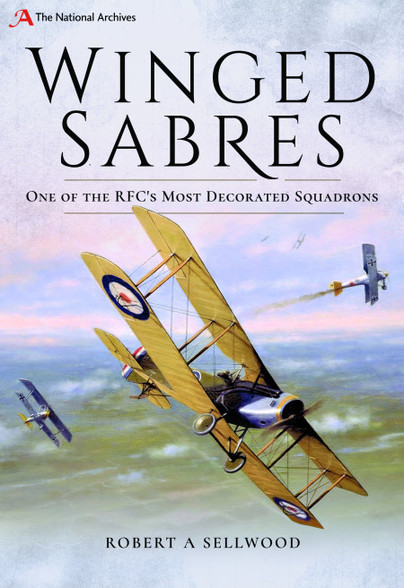 One of the RFC's Most Decorated Squadrons

Add to Basket
Add to Wishlist
You'll be £25.00 closer to your next £10.00 credit when you purchase Winged Sabres. What's this?
+£4.50 UK Delivery or free UK delivery if order is over £40
(click here for international delivery rates)

Winged Sabres is the story of a RFC & RAF squadron flying the cumbersome FE2 from February 1916 to September 1917, and then the superlative Bristol Fighter: a two-seater ‘fighter-reconnaissance’ squadron with an astonishingly high success rate.

20 Squadron was possibly the highest scoring squadron of the war and one of the most highly decorated, claiming over 600 combat victories with well over 400 confirmed in RFC & RAF Communiqués. Its members won seventy gallantry decorations including a posthumous Victoria Cross, and included fliers from the U.K. and around the world. Over 40 became aces, including the American Iaccaci brothers and some Canadians and others. But with a casualty rate of around 50 per cent including killed, wounded and POW they paid a high price.

Over 15 years research has gone into this book, covering a seldom-explored aspect of WW1 in the air: the two-seater fighter-reconnaissance squadrons. 20 Squadron’s motto was Facta Non Verba – Deeds Not Words!

Robert Sellwood's maternal grandfather, George Tester, was killed in action in September 1917 serving as an air gunner in 20 Squadron RFC. Wanting to know more about his grandfather and the Squadron in which he served led to 15 years research into the 20 Squadron. The result is this superb book.

It is difficult to find words to express my admiration for the exceptional research and writing which has resulted in this magnificent book. I n my opinion, easily the finest Squadron history written in recent years. The highest recommendation.

As a vivid and convincing reconstruction of deadly air combats long ago, this deeply researched book excels.

The author has made a very good job of presenting the history of 20 “Winged Sabres” Squadron and their aircraft. From the detail packed into this book, it is easy to see why the author spent more than fifteen years in researching for it.

This is a fascinating book and only narrowly missed being the Editor's Choice.

About Robert A Sellwood

Robert's Scottish Grandfather’s death with 20 Squadron in WW1 started his interest in the squadron, which soon became a much bigger project involving the study of many detailed official records. He has visited the Flanders Battlefields several times in this regard and have also received help from a number of descendants of the men involved. Robert lives in Sussex with his cat, Bella.