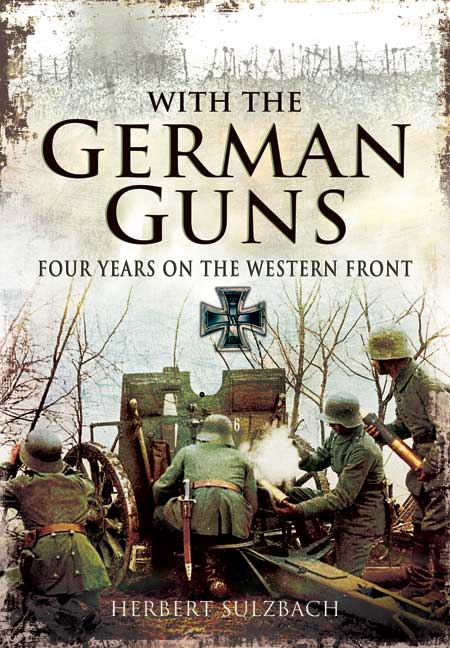 With the German Guns (Paperback)

Four Years on the Western Front

The Forces War Records Magazine  June 2016 book of the month!

You'll be £12.99 closer to your next £10.00 credit when you purchase With the German Guns. What's this?
+£4.50 UK Delivery or free UK delivery if order is over £35
(click here for international delivery rates)

At once harrowing and light-hearted, Sulzbach's exceptional diary has been highly praised since its orginal publication in Germany in 1935. With the reprint of this classic account of trench warfare it records the pride and exhilaration of what to him was the fight for a just cause. It is one of the very few available records of an ordinary German soldier during the First World War.

“One of the most noteable books on the Great War. It is a book which finely expressed the true soldierly spirit on its highest level; the combination of a high sense of duty, courage, fairness and chivalry.” Sir Basil Liddell Hart

His diary accounts throughout are gripping and really do help you to get a feel for the experience of the artillery war and - very importantly - from the other side of the wire. Another example of this is his description of the early phase of the German Offensive of March 1918... There are many dairy accounts from those who served during the First World War. This one, given this is a German artillery man, stands out in its own way, and consequently represents a timeless account of this aspect of the war.

If you want an insight not only into the German soldiers mind, but indeed into the general german mind and persona of the second decade of the 1900’s, much is to be found in this excellent historical work.

A tremendous book. Superbly well-written. Notes throughout about air victories of the aces and the uboat victories show the geezer kept up with current affairs.

He is a talented writer. You feel like you are right there.

So much of history is told by third parties. The author was actually writing during the biggest conflict to date. I went on the rollercoaster with him from assured victory to heartbreaking loss.

This is an invaluable eye-witness account of life at the lower levels of the German Army during the First World War, written by a reasonable, tolerant and patriotic German.

This is an important book at several levels. The author was a German Jew who fought through WWI as a German soldier, received two Iron Cross awards, remained in Germany until 1937, fled the Nazis to England and was commissioned in the British Army. An engaging story that is well-told.

This is a cracking book by a quite unique individual.

This book cover his experiences in WW1 from the assassination of Archduke Franz Ferdinand on 28th June 1914, and his subsequent enlistment, to the end of the war in 1918 and his discharge on 8th December. It is a very honest book and, written as a diary, no attempt has been made to moderate views in any particular areas and, at times, some of the language can be a touch dated. The writer captures the camaraderie and spirit of the German Army during the war and especially captures the affinity between the various Arms and the mutual respect that existed, most notably between the infantry and the artillery. He neatly details how welcome he is made by the infantry when he moves into the trenches as an artillery observer with good communications (some things never change!).

This is an excellent book that is an excellent description of the German soldier’s view of the war. It is quite superb and I recommend it to anyone interested in this period.

With the German Guns is a contemporary account of the First World War from the perspective of one German Officer. Since its publication in 1935 its has become a classic, sharing the ordinary soldier's view of the war and the soldiery spirit at the front.

Herbert Sulzbach's first person diary focuses on four years of trench warfare and is a valuable contribution to the overall individual story of the First World War, more so than many other such accounts perhaps, as the author was German.

Really interesting story of a German officer in WW1 . What was amazing was that right up to the end the soldiers hung on and believed in at least a stalemate when everyone back home was "done" with the war.

First person accounts of a historical event can never be matched by the historian. Sulzbach was a very interesting man, and his book is very well worth a read and to add to ones WW1 library

This is a first class personal account of Herbert Sulzbach’s war seen through his diaries. There is much insight into both his and the German soldier’s attitude to war and events. It lacks the grittiness and grime of Ernst Junger but is a very readable narrative and adds to the library of sources that are invaluable to counter the legions of post modern re-evaluations of the German soldier.