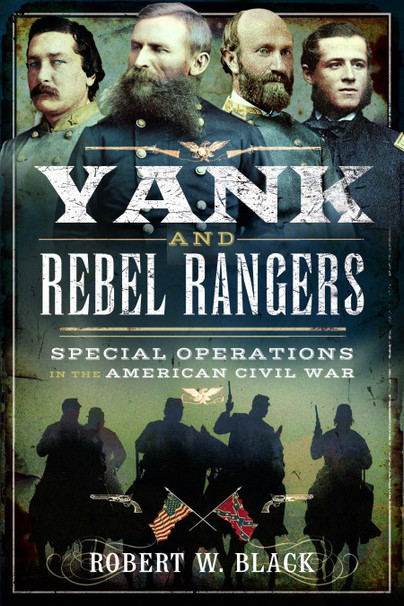 Add to Basket
Add to Wishlist
You'll be £14.99 closer to your next £10.00 credit when you purchase Yank and Rebel Rangers. What's this?
+£4.50 UK Delivery or free UK delivery if order is over £35
(click here for international delivery rates)

Overall this is an interesting book that looks at the less familiar Ranger and partisan units of the Civil War, giving some idea of how widespread they were and how much impact they could have on the fighting.

The term Ranger conjures a vision of today’s highly trained and
disciplined military forces capable of clandestine strikes deep
into enemy territory. Students of the Civil War will recall the
names and faces of wily, audacious Confederate commanders,
such as Turner Ashby, Harry Gilmor, “Hanse” McNeill, Elijah
V. White and John D. Imboden.
Profiles of these rebel leaders are among those featured in author
Robert W. Black’s well-crafted monograph, Yank and Rebel Rangers:
Special Operations in the American Civil War. The volume is published
by Sword & Pen Military, a division of Sword & Pen Books, a U.K.
company with a focus on military history and militaria.
Black, a decorated U.S. Army Ranger colonel who fought in
Korea and Vietnam, has studied the history of Rangers in a series of
authoritative books. In this effort to capture the essence of a Ranger
during the Civil War, he excels in providing definition and context.
Black’s preface and two-part introduction span the origins of the
Rangers in Britain and the
American colonies in the 17th
century to the military and
cultural background during the
Civil War. “Terrain is the workplace of the Ranger,” Black notes
in discussing the rough country
in which the Rangers operated.
Black also observes that many
Union-loyal subjects believed
ambushing—a classic military
tactic well used by Rangers—an
unjust method: “In America it
was a tactic routinely employed
by both Indians and whites from
their early encounters.”
What follows are profiles of
13 Ranger organizations on the
Southern side, including rebels
who participated in the raid on
St. Albans, Vt., and the plot to
burn New York City. Fascinating
reading here. Black also examines
10 Union organizations, among
them Henry Harrison Young’s
men and Sheridan’s Scouts.
If you’re looking for John
Singleton Mosby, John Hunt
Morgan and Nathan Bedford Forrest, they are not to be found here.
Black defines them and their commands as irregular forces, and directs
readers to consult his 2008 book, Ghost, Thunderbolt, and Wizard:
Mosby, Morgan, and Forrest in the Civil War.
Yank and Rebel Rangers is illustrated with 14 soldier portraits
ranging from often-reproduced generals to a few lesser knowns. This
is not a photo book, but a compendium of Civil War Rangers. Pick
up a copy in print or digital—you’ll come away a more informed and
better student of the Civil War.

"...an exciting read, full of daring feats and romantic rides through enemy lines..."

"Black makes no value judgments concerning any of these partisan groups. Instead, each is presented clearly and without prejudice—let the readers make up their own minds about the moral implications of the actions of these groups and individuals."

"I recommend Yanks and Rebel Rangers to anyone interested in partisan warfare in general and Civil War partisans specifically."

Overall, the book is an excellent overview, and in many instances entertaining, of the evolution of the Rangers during the American Civil War. Readers having a special operations background or interest, as well as Civil War buffs, will be rewarded by reading this book.