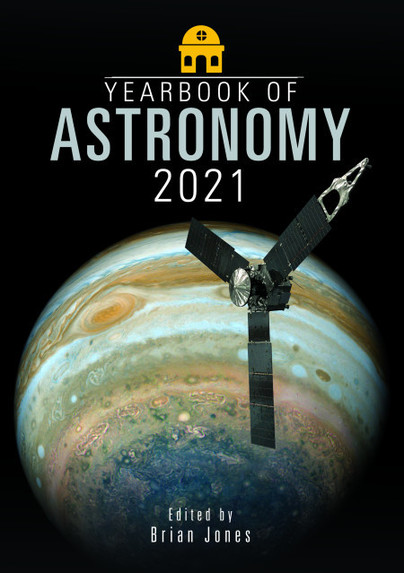 Preorder
You'll be £13.29 closer to your next £10.00 credit when you purchase Yearbook of Astronomy 2021. What's this?
+£4.50 UK Delivery or free UK delivery if order is over £30
(click here for international delivery rates)

Maintaining its appealing style and presentation, the Yearbook of Astronomy 2021 contains comprehensive jargon-free monthly sky notes and an authoritative set of sky charts to enable backyard astronomers and sky gazers everywhere to plan their viewing of the year’s eclipses, comets, meteor showers and minor planets as well as detailing the phases of the Moon and visibility and locations of the planets throughout the year. To supplement all this is a variety of entertaining and informative articles, a feature for which the Yearbook of Astronomy is known. In the 2021 edition the reader is presented with articles covering a wide range of topics including Male Family Mentors for Women in Astronomy; Henrietta Swan Leavitt and Her Work; Solar Observing; Obsolete Constellations; Lunar Volcanism; Pages From the Past: Collecting Vintage Astronomy Books; M&#257;ori Astronomy in Aotearoa-New Zealand and others.

In addition to the above is the first in a series of articles entitled Mission to Mars: Countdown to Building a Brave New World scheduled to appear in the Yearbook of Astronomy throughout the 2020s. These articles will keep the reader fully up to date with the ongoing investigations, research and preparations that are already underway, as well as those in the planning phase, all of which are geared towards sending a manned mission to Mars at or around the end of the decade. We are at the start of what promises to be an exciting journey.

The Yearbook of Astronomy made its first appearance way back in 1962, shortly after the dawning of the Space Age. Now well into its sixth decade of production, the Yearbook is rapidly heading for its Diamond Jubilee edition in 2022. It continues to be essential reading for anyone lured and fascinated by the magic of astronomy and who has a desire to extend their knowledge of the Universe and the wonders it plays host to. The Yearbook of Astronomy is indeed an inspiration to amateur and professional astronomers alike, and warrants a place on the bookshelves of all stargazers and watchers of the Universe.