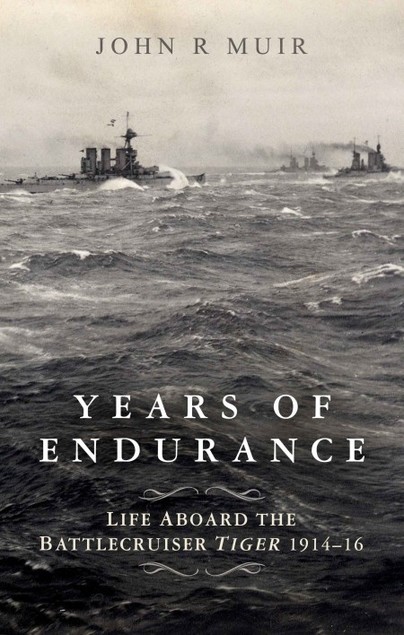 Add to Basket
Add to Wishlist
You'll be £10.39 closer to your next £10.00 credit when you purchase Years of Endurance. What's this?
+£4.50 UK Delivery or free UK delivery if order is over £35
(click here for international delivery rates)

I am usually no fan of the writing style of the Victorian or Edwardian periods, finding the language used impenetrably dull (apart from Kipling). This book definitely doesn’t fall into that category; Muir writes in an engaging and accessible way, and his story is a page turner from start to end. Indeed, I can’t find anything to detract from this book.

Five mushrooms out of five!

"This outstanding memoir must be rated as one of the best about what it was like to serve on a battlecruiser or any other warship during the First World War."

Regular readers of this blog will know I have a soft spot for memoirs from Old Salts. Muir’s book is a vivid recollection of life in a Royal Navy battlecruiser during World War I. The author was the senior medical officer aboard HMS Tiger, from her commissioning in October 1914 until his departure in the autumn of 1916, when she sailed to Rosyth for repairs to the damage incurred at the battle of Jutland. Muir takes the reader right to the centre of the action in the first years of the war, his story also about the officers and men who were his comrades in those years; their qualities, their anxieties and the emotional dimension of their experiences. His insights are those of a man sensitive to the human condition in all its facets, and they bring vividly to life a generation of men who fought at sea more than one hundred years ago. Published in the late 30s, this new reprint edition is a valuable contribution to our present appreciation of the life in the Royal Navy afloat in the Great War.

"This book provides a somewhat unusual perspective on the Royal Navy in World War I, but is written in such a way, that all with any interest in this period, will find it enthralling and informative."